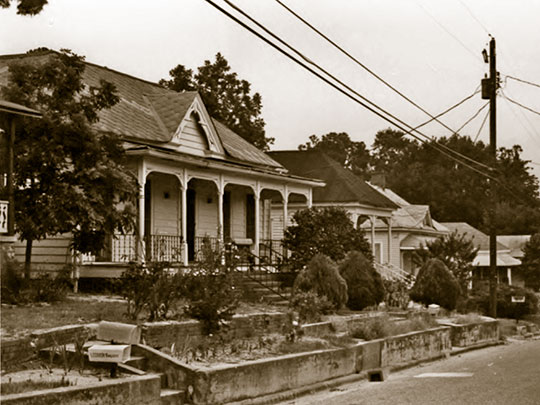 The Kid Alley Residential Historic District is one block of houses built in the early 20th century. This district is one of two intact Victorian residential neighborhoods left in the Girard area. A small area of only 12 houses, they are wood frame, single-family residences which range in size from large cottages to small shotguns. Elaborately decorated with architectural detailing, all of these houses are painted in the Victorian style. The lyre pattern, a consistent architectural detail in Phenix City, is seen in this district in the attic vents and decorative gingerbread along the porches. Most of these houses are built close together and have small lots. However, the yards are landscaped with shrubbery and very few large trees are in the front yards.

The Historic District is one of the remaining intact tracts of land subdivided as "settlement lots by M.M. Moore in 1890. This district runs north and south along 11th Avenue for one block, beginning at 9th Place and taking in both sides of the road.

Five lots were purchased by C.T. Gifford, a local contractor who owned a nearby home whose old driveway at the time intersected 11th Street at the south end of the district. He apparently built five of the existing homes which are small, but ornately finished. These were used as rental properties.

The Kid Alley District was a middle class neighborhood from the beginning, and apparently excluded unskilled laborers. This was true in 1930, forty years after its founding, when a barber, a grocery store operator, a railroad man, a lunch room supervisor, an automobile dealer and a Fort Benning, Georgia carpenter were among the neighbors recalled by a resident. The street always included some rental property, but well built homes attracted long term renters, particularly families with upward mobility. The resulting youth of the families may account for the area's traditional name, which dates back to at least 1910. A story recalled by an older resident explains the name. A man, it is said, had trouble threading his wagon through the narrow dirt street for the children playing there. Complaining to the postman, he was told, "Don't you know they call that Kid Alley because if you go through with a wagon, you've got a kid for every spoke." The name and the profusion of children both persisted through the 1930's.