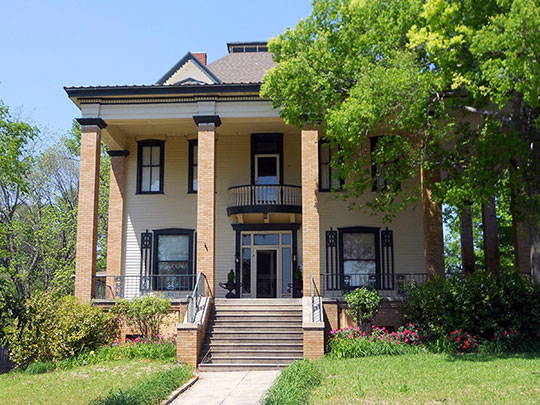 Phenix City was settled initially, like most of east Alabama, by white traders and "intruders" on Creek tribal lands. The area passed from Indian to white ownership between 1833 and 1836, when most of the Creeks were removed by armed force. Upon Indian removal, settlement accelerated, and more durable structures were built. The agricultural lands of the Creek Nation were the primary object of east Alabama settlers, with the Phenix City area being from its inception a major bridgehead torn and distribution point for cotton, corn, and other produce. The riverside fields near Holland Creek were used as corn fields by their last Indian owners, and farming and grazing occupied much of the area until residential expansion after World War II. A military stronghold and central staging area in the campaign against the 1836 Creek uprising, Phenix City again achieved military significance when Wilson's Raiders attacked its extensive fortifications in 1865, a week after Lee's surrender. Transportation routes created Phenix City as a settlement. At the fall line of the Chattahoochee River, the northernmost loading point for steamboats, it shared with Columbus the first bridge across the Chattahoochee River on the state line, from which wagon roads (later highways) branched in several directions across east Alabama. Later two railroad lines, one organized by local residents, passed through the area. Most of the Chattahoochee River bridges before 1870 not only in Phenix City, but along the length of the River, were engineered and constructed by Horace King, a resident in the area. King, a slave until being freed in 1846, specialized along with his master, John Godwin, in large-scale construction projects: such as bridges, factories, and courthouses. Girard, the core of the community of the area, was surveyed in a regular gridiron pattern of streets echoing Columbus. Girard, however, represents a significant failure in geometric town planning because surveyors failed to take into account creeks and other interruptions in the grid. The city is characterized today by straight but discontinuous streets. Architecturally, Phenix City contains a variety of building types, including Greek Revival, Victorian shotgun homes and cottages, Neo-Classical residences and commercial structures, and Bungalow homes and schools. While collectively the buildings are not the finest examples of architecture in the state, they represent a period and type of construction which shows, a unique type of development often associated with mill towns. Industrially, the Phenix City area has been a lumber and milling center since the first sawmill was built on Holland Creek by Benjamin Marshall, Girard's Indian property owner. Slow to recover after the Civil War, which damaged it seriously, the area's industry has included cotton mills, grist mills, brickyards, sawmills, a brewery, a legal distillery, a paper mill, a concrete works, several cotton gins, a casket factory, an iron foundry, and a variety of light industries. As a commercial and warehousing town, Phenix City has historically deferred to Columbus, Georgia, since an early Supreme Court decision prohibiting docks on the Alabama side of the River. A significant exception to this was the trade of illegal alcoholic beverages, which was centered near the Dillingham Street Bridge until the state crackdown in 1916, following the passage of Alabama's prohibition law. The bootleg traffic which continued in the wake of this crackdown was the nucleus of an organized crime establishment which grew to massive size and virtually controlled the city and county government during World War II and almost a decade thereafter. Gambling casinos and houses of prostitution were allowed to thrive openly near the bridge and at other points in town, nurtured especially by the expansion of Fort Benning, in Columbus. The election of an anti-crime Phenix City attorney, Albert Patterson, as Alabama Attorney General, signalled an abrupt shift in the political climate of the town. Upon the assassination of Patterson, his son was elected Attorney General. Prior to Patterson's election, Governor Gordon Person had the city placed under Martial Law. Patterson's election and his son's election as Governor four years later gave Phenix City political significance in the state capitol where its native son, Governor and local representative led a successful effort to expand state support of public education. Education has played a role in Phenix City since 1867. Often sponsored by local churches, it is significant not only in and of itself, but as a rallying point during the Phenix City clean-up when political power swayed education development. Religion is significant to Phenix City as a stronghold for beliefs in what was often a corrupt society. With approximately 42 churches in the area in 1954, it had more churches per capita than any other city in the United States.