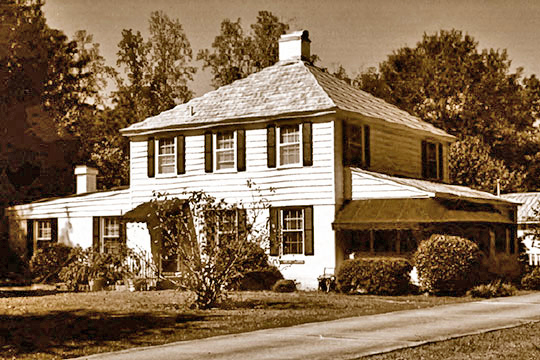 The Cahaba Homestead Village Historic District was listed on the National Register of Historic Places in 2006. Portions of the content of this web page were adapted from a copy of the original nomination document. [‡] Adaptation copyright © 2015.

The construction of the Cahaba Homestead Village, one of Franklin Delano Roosevelt's federal relief projects, was to improve accommodations for lower income commuter families from the Birmingham area. Thus the resources within the District represent an important development in Alabama housing.

D. H. Greer was selected to be the architect of the Cahaba Homestead. He designed several different house plans and narrowed his choices to a select few. Instead of a wide variety of plans, a few designs were used and dispersed throughout the project. The Cahaba Project was a later RSA project and utilized standardized plans to decrease cost. Hence the Cahaba Project's houses are mostly massed plan cottages of one story with side gable roofs and two story duplexes with gabled and hip roofs.

Two hundred and seventy-three, twentieth-century residential buildings are located within the Cahaba Homestead Village Historic District. These residences were begun in 1936 and completed by 1938. The Cahaba Homestead Village Historic District contains two hundred and sixty-four buildings that are considered contributing resources. The exceptions to these contiguous resources are few.

Massed Plan Cottage: The term "massed plan" pertains to the form of a dwelling. According to Field Guide to American Houses (McAlester and McAlester 1984), a massed plan is a generic house form featuring a floor plan of two or more rooms deep and two or more rooms wide. Dwellings designated as such typically lack specific bay and room arrangements and stylistic embellishment that would classify them as another more specific typology. The massed plan cottages identified in the Cahaba Homestead Village Historic District are, for the most part, two rooms deep and two or more rooms wide. They are topped by a side gable, cross gable, or hip roof. There are 250 mass plan cottages located in the District.

Ranch: Like the minimal traditional, the ranch has its roots in Colonial antecedents. The architecture of Frank Lloyd Wright is also in the mix. The ranch features a low pitched roof with broad eaves and a streamlined mein. Most ranches are given to rambling, open floor plans reminiscent of Wright's residential designs. There are 5 ranch houses in the District.

Duplex: The duplexes located within the Cahaba Homestead Village are two story dwellings with a side gable or hip roof of tin shingles. The houses are constructed of brick and wood framing. Some of these duplexes sport Colonial Revival details such as gabled dormers. The majority of the duplex houses have 6/6 double hung sash windows and partial width screened porches. There are approximately 50 Duplexes in the District.

Architect Greer's site plan for the Cahaba Homestead Village consisted of a grid pattern of streets, the central axis of which, Chalkville Road, was oriented in an approximated north/south direction. Chalkville Road conducted traffic to and from the Gadsden Highway (Highway 11), the major traffic artery in Trussville. Rockridge Avenue and Parkway Drive, which ran parallel to Chalkville Road, served as auxiliary axes, conducting traffic to and from the periphery of the village. Cross streets, including Pine, Oak, Lake and Magnolia Streets, North and South Mall, and Brentwood Avenue, facilitated easy access to all parts of the community. Thus, Greer's site plant accounted for automobile and pedestrian movement to and from and through the Cahaba Homestead Village.

The blocks created by grid patterns were divided into lots measuring approximately a third of an acre in size. The project directors determined this lot size to be sufficient for a house, garage, and space enough for a backyard garden and small home flocks of poultry. The prominent fixture on each lot was a residential unit derived from one of a few basic plans. The dwelling types were placed at intervals throughout the project, painted various colors, slightly altered, and arranged in a variety of manners on the lots in order to relieve monotony. Yet, the underlying uniformity of design helped forge a sense of community identity.

In the 1930s and 1940s public housing was an outgrowth of the long-held concern that government intervention was necessary to better the lives of the poor living in the nation's slums. From the onset of the Cahaba Homestead Village project, project manager, W.H. Kessler envisioned the village as providing improved living conditions for families of industrial workers and white collar employees of the Birmingham area.

Improved living conditions meant removing the target residential population from Birmingham's overcrowded, run-down, smog-ridden mill villages to an idyllic suburban, garden community in the country. The great irony is that the community was built on the site of an erstwhile iron furnace and slagheep, but reclamation and landscaping completely erased all remnants of an industrial past. The mall at the core of the Cahaba Homestead Village was intended to provide residents with recreational opportunities. Open green space was common to public housing of this era. Private garden space, an essential component of PWA housing and RSA cooperative settlements, enabled Cahaba Homestead Village residents to beautify their individual space with flowers and grow essential vegetables. The cooperative building provided Village residents with more affordable goods, thus ameliorating the economic hardships of the Great Depression. Even the uniformity in residential design in the Village served to forge a sense of community belonging. The social engineers of the New Deal believed that the community had a better chance of survival if its residents subscribed to the common goal. The Cahaba Homestead Village represents how the federal government intended to insure the economic and social well-being of its citizens through self-contained communities.