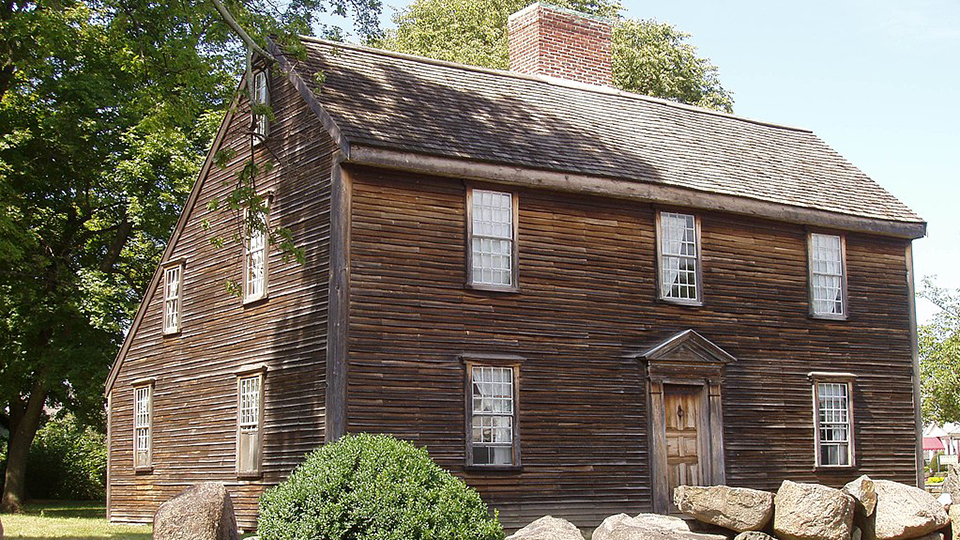 A saltbox house [†] is a Colonial style of architecture which originated in New England. Saltboxes are frame houses with two stories in front and one in back, having a pitched roof with unequal sides, being short and high in front and long and low in back. The front of the house is flat and the rear roof line is steeply sloped. The sturdy central chimney is a simple but effective focal point. The simplicity and strength of this design, first seen around 1650, continues to make saltbox houses popular today.

Saltbox (Lean-to) [††] houses were at first created by adding sheds to the rear of English houses, but thereafter the sheds became an integral part of the structure. The es- sentialfeatures of alean-to, also called a saltbox, were a tall front wall and a lower rear wall resulting from alonger rear slope of the gable roof. The pitch of the front and rear roof planes was about equal. The front wall contained larger windows opening into the most important rooms. To take advantage ofthesun'sheat,lean-to houses traditionally faced due south until align- ment with the town streets became a more important consideration. Half of Nantucket's historic lean-tos follow this earlier custom of facing south.

The building plan was always orga- nized around a massive central chim- ney stack serving several fireplaces; above the roof it was commonly articulated and flanged. Many of the early lean-tos were built in a half-house ver- sion, with the chimney to- ward one side to provide for lateral expansion at a later date, such as can be seen at 105 Main Street. In a lean- to the door was aligned with the chimney but window symmetry (fenestration) was not essential. Windows had small-paned, double-hung sashes, commonly 12/12, with protruding pegged frames. Walls and roofs were wood-shingled and exhibited utmost simplicity of design and a complete restraint in decoration.

Photo: This 18th century "salt-box" type house was the home of two American Presidents and the birthplace of one of them. John Adams, second President of the United States, owned the house from 1761 until 1803, though he did not occupy it after 1783. For part of that time, the old kitchen on the southern end of the house served as his law office and it was there that he prepared the draft of the Massachusetts Constitution, ratified in 1780, which provided a model for the form of general government outlined in the Federal Constitution of 1787. John Adams' son, John Quincy Adams, sixth President, was born in the house in 1767 and lived there during his childhood and briefly as an adult.