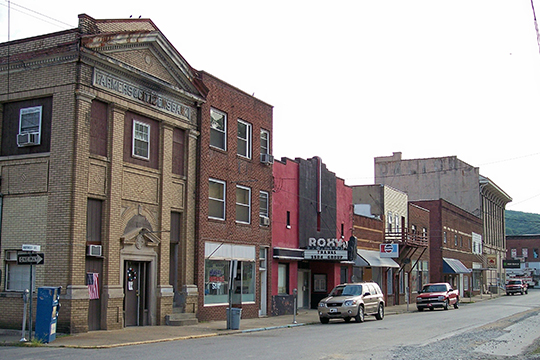 The Clendenin Historic District was listed on the National Register of Historic Places in 1996. Portions of the content on this web page were adapted from a copy of the original nomination document. [‡] .

Clendenin (population 1,203 in 1996), is primarily a residential and service community that occupies a level tract at the confluence of the Elk River, and Big Sandy Creek. The Elk River is a major tributary of the Kanawha River that flows through the central West Virginia counties of Pocahontas, Webster, Clay, and Kanawha Counties. The community is located about 20 miles northeast of Charleston in an area that witnessed important early industrial developments. The region's deposits of brine, coal, gas, timber, oil, and water attracted industrial entrepreneurs who established facilities, one of which, Union Carbide, would become internationally famous. Clendenin's boom conditions of the late 19th and early 20th century languished, however, as the nearby Kanawha Valley attracted to its spacious topography several of the town's factories. By the second half of the 20th century, Clendenin reverted to the status of a local service center that supplied the local population with department stores, banks, retail shops, service stations and public services. Because development in the town waned to an extent, continuing use of many older building dating to the 1890s and first decades of the 20th century now provide an important physical legacy reflecting the development of a small West Virginia town.

Clendenin is a linear town that presents a development pattern along the relatively narrow benches of the Elk River Valley. At the center of this development is Main Street with its 1890s late Victorian commercial buildings. The importance of the street was enhanced by construction of the Clendenin Bridge (1923, at Main Street and Elk Avenue) that provided a critical link with the western section of the town. Within the small commercial core are located a variety of brick buildings standing along Main Street, Maywood Avenue, Elk Avenue, and Koontz Avenue. To the northeast of Main Street, Koontz Avenue provides an early adjacent residential area containing a school, a church, and older houses, one of which, the Craftsman and Colonial-style Luther Koontz house (1911, 301 Koontz Avenue), was considered Clendenin's finest residence at the time of construction.

Many of Clendenin's major downtown buildings are constructed of brick and feature heavy cornices, brick corbeling, and vernacular "builders" facades. Several banks, among these the old Clendenin State Bank, a Neo-Classical Revival anchor building (1923, 2-4 Main Street) and the Farmers and Citizens Bank (c.1925, corner of Maywood Avenue and Cardinal Street) were designed by Charleston architects. Their prominent corner locations are a reflection of the prestige of these institutions. Toward the close of the town's major period of construction activity is the Roxy Theater (c.1930-40) a Maywood Avenue Art Deco-style landmark that still functions as a movie theater.

Clendenin was originally a small settlement from which a village called "Chilton" was founded on the opposite side of the Elk River. This was a community of timber and coal mining, the area's first important industries. At nearby Falling Rock one of the first channel coal veins, discovered in 1846, became a rich source in the manufacture of artificial gas. Its name is a corruption of "candle coal" because it burns with a bright flame.

There were two significant events which occurred in 1893 and around 1900; these were the coming of the railroad and the drilling of the first gas well. With the development of one of the largest oil and gas fields in the state, the town developed into a boom town almost over night. Banks were established, stores built, oil and gas offices opened and industrial plants constructed. These conditions fostered the construction of many of the town's commercial buildings.

The Coal and Coke Railroad was built up Elk River in 1890. The timberland attracted logging operations. A tram-road was built across the Elk River at Clendenin up through Cobbs Bottom and on up to Left Hand. A small engine called a "dinkey" hauled the logs down to Clendenin. A large lumber industry developed on the south side of Clendenin, as a result.

The South Penn Oil Company purchased a land lease from M.A. Cobb in 1901. A United Fuel pipeline from Left Hand to Clendenin which carried gas from the fields crossed the M.A. Cobb property in 1903. A series of four leases from M.A. Cobb brought the Virginia Gas and Oil Company in 1916, 1917 and the remaining two leases to United Fuel Gas Company in April of 1922. The company houses for Cobb Station Compressor Plant, once labeled the world's largest compressor station, were started in 1917, and completed in 1920.

Another large industry near Clendenin was the Elk Refining Company. It was built in 1915 and as the years passed the plant increased in size. Besides gasoline, the plant produced many kinds of lubricating oil, pressure grease, Naptha, Benzine, fuel oil, floor oil and wax.

In 1920, Union Carbide built the nation's first plant for the production of synthetic organic chemicals from natural gas. The local historical marker states: "...from this nucleus grew the nation's giant petrochemical industry, employer of thousands."

Following World War I, the early history of the industry actually started at Mellon Institute in Pittsburgh, where a young scientist by the name of Dr. George O. Curme of the newly formed Union Carbide and Carbon Corporation began a series of experiments on the synthesis of organic chemicals from "oil-forming gas.'' These early experiments were destined to become the cornerstone of an industry that now supports a world of necessities and luxuries for the American way of life.

Synthetic organic chemistry was just a laboratory child in 1920. But with the background of information developed earlier by Dr. Curme and his associates, Union Carbide's research program was ready for expansion.

With this early start and the energy and enthusiasm shown by the small group of dedicated men from Mellon, a survey was made of the natural gas fields in the United States to find a region in which the gas was rich in hydrocarbons. Union Carbide discovered that the natural gas in the Clendenin area was as good, if not better, than any other to be found elsewhere.

In July, 1920, Carbide purchased a small gasoline extraction plant and Dr. Curme and his associates moved to Clendenin to continue the earlier work done at Mellon.

This plant had contracts for purchasing it for removal of gasoline by the absorption process, and selling the stripped gas back to the gas company. Such a plant furnished an ideal source for the ethane and propane required for the manufacture of ethylene and propylene from which the desired hydrocarbon raw materials were obtained.

In the conversion of the plant for the production of chemicals, this group of young scientists used the trial and error process — building equipment and tearing down equipment. In so doing, a great industry emerged from the minds of men and the natural resources of a rich nation, to form the nucleus of a business which today provides employment for thousands of people throughout the world.

Propane, which became a lively business, was sold as bottled gas (later called Pyrofax) for domestic use beyond city gas mains. Other basic gases from the separation process found a market as refrigerants. Ethylene glycol started its career by joining with glycerin in a new type low-freezing dynamite.

The founder of the chemical industry did not come to Clendenin with a blare of trumpets or newspaper headlines. They arrived quietly, rented rooms, donned overalls, and stepped into the most rewarding experience they had, as they watched the birth of a new industry.

Five years later, the company had outgrown Clendenin. There is only one remaining building left from the Clendenin site. From this little noted birth of the petrochemical industry at Clendenin, West Virginia, in 1920, there emerged one of the world's leading businesses, with new companies being formed each year to meet the demands of a multi-billion-dollar industry. The Union Carbide Corporation moved to South Charleston in 1925.

The Union Carbide Corporation and its affiliates operate more than 400 plants in over 30 countries. UCC is the nation's first producer of petrochemicals, the leading maker of plastics, first in the production of alloying metals, the largest producer of manufactured carbon and graphite, the leading extractor of gaseous elements from the atmosphere, the outstanding producer of anti-freeze coolants, first in the manufacture of packaged portable power, and the largest contractor of the U.S. Atomic Energy Commission.

Prosperity created by emerging local industry brought into existence as many as three banks, the Farmers and Citizens, the Clendenin State Bank, and the First National Bank. Other manifestations of boom activity appeared along the town's central streets. Here 2 and 3-story brick commercial buildings were constructed to house hardware stores, shops, groceries,, and professional offices. Small hotels, such as the Monarch Hotel on Kanawha Avenue, were established to accommodate oil and gas field workers as well as rail passengers. Though many local buildings have been altered at ground level, they retain upper floor period design elements, such as brick corbeling, paneling, and heavy cornices.

Clendenin was named for Kanawha County's first pioneer family. The area of land encompassing Clendenin was given to William Cobb by land grant in 1788 by Virginia Governor Edmond Randolph. Early settlers in the area arrived about 1795 and set up small farms scattered around the Big Sandy Creek.

Clendenin was not laid out as a town until 1877, when William Chilton established a townsite. About this time channel coal was discovered in the area and one of the first refineries in America was built on Balling Rock Creek. The old chimney still remains. With the discovery of oil and gas in 1900, Clendenin became a boomtown.

The first Union Carbide plant was built about 1920 in Clendenin, but moved in 1925 to south Charleston, WV. The town was incorporated in 1904, a water system was installed and a fire department organized in 1910, and streets were paved in 1914. After the decline of the oil and gas industry and termination of railroad service to the area, Clendenin lost its major industries. Today the town remains a service center for the area.

Billy Joe Peyton, Associate Director to the Institute for the History of Technology and Industrial Archaeology, Morgantown, WV.