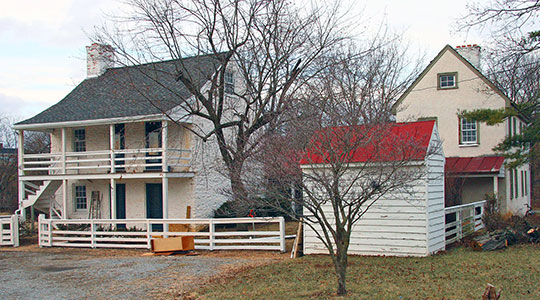 Harpers Ferry is a small town known around the world for the part it has played in history. George Washington personally selected Harpers Ferry as the site for a United States Armory in 1795. In 1851, the Corporation of Harpers Ferry was incorporated and the first officials were elected. Every child in this country learns that in 1859, abolitionist John Brown was hanged after his attempt to start an uprising of slaves in Harpers Ferry, in his quest to end slavery.

The 300 acres that make up the town reach from the quiet Pine Grove section in the northwest corner to the downtown where the rivers join. Laid out in a grid on a Blue Ridge Mountains peninsula formed by the Potomac and Shenandoah Rivers and constrained by the natural landforms, the town retains its 19th century village character. Although much of the original grid was in place before incorporation, the town was officially platted in 1852. All U. S. Government lots not sold in 1852 were sold in 1869.

Both sides of the Civil War wreaked havoc on the town. Buildings were destroyed by fire, the mountainsides were stripped of their trees to be used in making charcoal, the railroad bridges linking the town to the east were left in ruin many times, and town residents were pushed out by the dangers of war and occupation. Attempts to renew the town's industrial prosperity after the war were thwarted by repeated river flooding. Harpers Ferry never returned to the industrial prominence it held before the war.

In 1944, the federal government established Harpers Ferry National Monument and in 1960 added Storer College, established in 1865 as a school for newly freed slaves, to what is now Harpers Ferry National Historical Park. These actions have helped preserve many of the original buildings within the Park's generous boundaries, and helped protect the tree covered ridges that surround the town.

Designation of the entire town as a Historic District in 1979 furthered the effort to protect the unique character of Harpers Ferry.