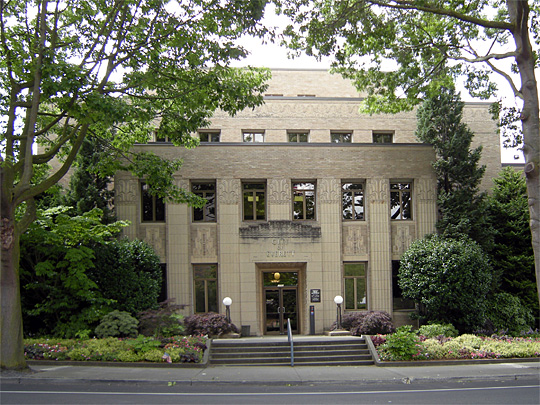 The Everett City Hall (3002 Wetmore Avenue) was listed on the National Register of Historic Places in 1990. Portions of the content on this web page were adapted from a copy of the original nomination document. [1]

The Everett City Hall is a monumental Art Deco style municipal building built in 1929 of buff-colored brick and designed by prominent Seattle architect A.H. Albertson. Located in the heart of the city's commercial district, the building is sited at the center of a four block area dominated by government buildings including the Mission Revival style Snohomish County Courthouse to the east and the Classical Revival Federal Building to the west, both listed in the National Register of Historic Places. The City Hall is well preserved, and clearly reflects its original design and historical associations.

The City Hall is a four-story masonry structure with a full basement and a flat roof. Built on a rectangular plan and composed of several setbacks, the building measures approximately 115 feet along the Wetmore Avenue (east) facade, and 100 feet along the north Wall Street elevation. The building's form is governed by a sense of Neoclassical symmetry and hierarchical massing, especially evident on the main facade. But the architect eliminated all classical detail and introduced a profusion of Art Deco ornament, especially pronounced on the projecting central pavilion which serves as the focal point for the entire composition.

The two-story pavilion is constructed of buff-colored brick punctuated by six bays and articulated by seven massive pilasters faced in rough-textured terra cotta. The verticality of the pilasters is accentuated by the horizontal mass of the poured concrete pedestal on which they rest. A belt course articulates the juncture of concrete and brick. Rising from this, the pilasters are highly stylized versions of the Corinthian Order, with fluted shafts and capitals composed of simplified volutes and cauliculus. Windows and ornate spandrels are recessed from the pilasters, thus emphasizing the verticality of the facade, and lessening the weight of the blocky massing. The spandrels are faced in richly embellished low relief terra cotta with stylized volutes and waves. The windows are double metal casement units.

The main entrance to the building spans the width of the central bays of the pavilion, and is surmounted by bronze letters which read "City of Everett." The stepped border of the terra cotta ornament above the doorway is suggestive of a pediment. Here again are placed low relief designs involving stylized volutes, floriated scrolls, and rosettes. A profusion of repeated volute motifs adorn the terra cotta entrance frieze. The main bronze entry doors and the original bronze lamp standards survive.

Behind the pavilion rises the three-story main building. The building is set back twice from the plane of the pavilion. The middle six bays, which correspond with the bays of the pavilion, project slightly from the corner bays. Flanking the main three-story building are two-story wings, thus creating a stepped profile. Windows across the facade are regularly spaced with metal casements. A terra cotta frieze of stylized anthemion motif forms a flat cornice which wraps around both the north and south elevations at the third story, and serves to accent the rhythmic ascent of the building setbacks.

The original Art Deco ornament on the exterior was carefully preserved in a 1978-79 rehabilitation, as were the distinguishing features of the main interior public spaces. The interior includes a large lobby with open stairway leading to the second floor. Distinctive features include marble floors, bronze stair railing, and bronze light fixtures as well as much original woodwork and plaster work. The original third floor jail was removed and the spaces converted to offices. Offices elsewhere in the building were also rehabilitated. At the same time, the exterior rear entry was enclosed to provide a secure access for the public safety division and the jail now located in the basement level of the building.

The Everett City Hall is a significant example of the Art Deco style, designed by distinguished Seattle architect A.H. Albertson and characterized by stylized classical ornament and setbacks. Constructed in 1929 on the eve of the Great Depression, the City Hall replaced an outmoded frame structure, and in its monumentality and modernism it reflected the optimism of the era and the growth of city government. Together with the nearby Snohomish County Courthouse and the Federal Building, the City Hall is an important symbol of the civic heritage of the community. The building retains good integrity and continues to serve as the seat of local government.

When the City of Everett was incorporated in the spring of 1893, plans for a city hall were made almost immediately. Temporarily, city government conducted business in rented chambers in the Clark Building at Hewitt Avenue and Wetmore until a new facility was constructed. Soon, a wooden building on Broadway, designed by Berglund and McKenzie, was completed. The police and fire departments and city library joined city council and the mayor in [his modest structure which, although altered and expanded over the years, barely kept pace with the demands of a rapidly growing city.

Everett's population grew dramatically in the early 20th century. When first incorporated, the city had a population of 5,000, but by the turn of the century population had grown to 8,000 and by World War I had reached a figure four times greater. The booming economic prosperity of the 1920s brought still more growth to the community-and change to city government which had reorganized that decade into a commission form of municipal government. The need for a larger and more modern city hall to serve the municipality was a perennial issue among officials of the growing community. Logically, the prosperous years of the 1920s seemed an appropriate time to undertake the necessary capital improvements, but political struggles sidetracked plans for a new city hall until the end of the decade. When the effort finally got underway, the days of prosperity were almost at an end and, ironically, actual construction of the building coincided with the Wall Street crash.

But at the time that construction began on the city hall, feelings about the future of Everett were decidedly bullish. Construction activity in the city had broken records in 1924 and again in 1925 (due, in part, to the economic impact of the Japanese earthquake of 1923) and no one seemed to question that the prosperity would continue. This atmosphere of confidence contributed to the selection of architect A.H. Albertson, who was designing the landmark Northern Life Tower in Seattle (National Register, 1975) when he received the Everett City Hall commission. The Northern Life Tower is widely viewed as the finest Art Deco skyscraper in Washington, and a preeminent symbol of the region's prosperity during the period. Everett officials, for their part, were looking for an aggressive, contemporary architect to match their own burgeoning civic pride, and Albertson seemed a perfect match.

A.H. Albertson was born in New Jersey in 1872, educated at Columbia University, and came to Seattle in 1907 for the firm of Howell and Stokes. Independently, or in the partnership with Paul Richardson and Joseph Wilson, Albertson designed projects that ranged from the Security Building in Olympia (1926) to St. Joseph's Church in Seattle (1932).

The actual decision to proceed with the Everett City Hall seems to have crystallized during the winter of 1927-28. In September of 1928, Albertson placed preliminary drawings in the hands of Everett's commissioners, but revisions stretched through the winter. Something very close to the final design was made public in mid-January, 1929.

The design stood in sharp contrast to Albertson's only other major work in the city, the Citizen's Security National Bank building on Colby Avenue, designed just a few years before. That staid, formal design with its classical columns, proved to be the antithesis to the City Hall but the intent of the architect was nearly the same-to impress the viewer with the solidity and power of the institution within. Yet in the case of the City Hall, Albertson added an extra message-that the institution was thoroughly up-to-date and forward-looking. Its stylized ornament transformed classical imagery into modern forms, underscored by setback massing, and sleek interior materials.

Actual work began at the site at the corner of Wetmore and Wall on February 22, 1929, and the official cornerstone dedication took place on August 2, 1929. Furniture arrived early in October, and the building was finally occupied in November. In general, the building was well received by the public but at least one citizen was offended by the modern design, complaining to the newspaper that the structure looked like a great toad squatting in a hole. But at the cornerstone laying, Mayor Nelson Martin proudly noted that the building was meant to serve future as well as present generations and that its architecture would instill pride among all citizens. "We have endeavored to erect for the City of Everett a building that will be a credit to it for a good many years to come," he declaimed, "a building that you can show your friends, visitors, or tourists, no matter where they come from." It was a perfect architectural representation of the hope and pride of Everett officials in the last days of the robust 1920s.

Despite the economic decline and the war years that followed, the city hall served the government well through the mid-20th century. When problems with energy efficiency, handicapped access and other concerns arose in the late 1970% the building was rehabilitated but its essential exterior integrity and the integrity of its major interior spaces was preserved. Completed in 1978-79, the rehabilitation removed the city jail from the third floor, yielding an additional 6,000 square feet of office space. The structure, originally built to house a staff of 70, now accommodates 140 workers. And at the rededication of the structure on July 2, 1979, it was noted that the building will remain useful for the city past its centenary in 2029.

As a reflection of Everett's civic history during the prosperous 1920s, and as an example of the Art Deco style in the Northwest designed by one of the region's most important architects, the Everett City Hall remains a leading landmark in the community.