Photo: View of Anacortes from Cap Sante, looking west towards the downtown and marina. The San Juan Islands are in the distant right. Photographed by user:User:M. Lounsbery (own work), 2006, [cc-by-3.0 (creativecommons.org/licenses/by/3.0)], via Wikimedia Commons, accessed May, 2013. 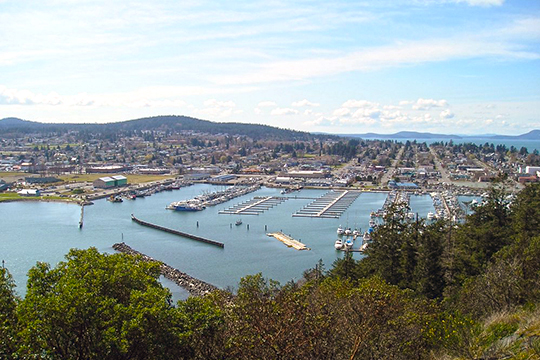 Anacortes became an incorporated city of the third class in 1891. The original boundaries of the city as described in the incorporation petition were: "Beginning at the point on the west shore of Fidalgo Island, where the south line of Township thirty-five, North of Range one, East Willamette Meridian meets deep water in Burrows Bay, at thirty feet depth at low tide; thence East on said line to the center of Fidalgo Bay; thence Northerly through the center of the said bay, to a point where the water is thirty feet deep at low tide; thence northerly along the said water from pursuing said depth of thirty feet at low tide to and through Guemes Channel and Ship Harbor, around the north end of Fidalgo Island passing Shannon's Point and Green's Point to place of beginning."

Incorporation came at a high point in the early beginnings of the settlement, which began in the shelter of Ship Harbor in the 1870's, and marked the beginning of the City of Anacortes. In the late 1870's, Amos Bowman, considered the town's founder, and husband of the town's namesake, the former Anna Curtis, established a general store and post office in the Ship Harbor area. In 1889, the quiet settlement was thrust into a boom period based on speculation that a western terminal of the transcontinental railroad would be developed at Anacortes to take advantage of the area's natural, deep water harbor. In less than a year, the population swelled from under one-hundred to three-thousand by March of 1890. The railroad terminus failed to materialize and the boom soon passed, bottoming out with the economic crash of 1893. By the late 1890's, Anacortes and the Country began recovering from the 'Crash,' and the City's prosperity was now based on the local natural resources of lumber and fisheries. At the turn of the century, the City's population was 1,476.

From 1900 to 1950, growth of Anacortes economy and population to 6,900 was dependent upon development and expansion of those same resources, lumber and fisheries, which were the basis of the economy in 1900. In the 1950's, technological changes and resource depletion were beginning to erode the strength of the local natural resource base but two new factors were introduced to the local economy, petroleum refining and tourist/marina activity. In the early 1950's, with a decline in wood products and fisheries, the Anacortes population began to decrease, but in 1953, with development of the Shell and then Texaco refineries on March Point, population growth continued on an upward trend, reaching 8,400 by 1960.