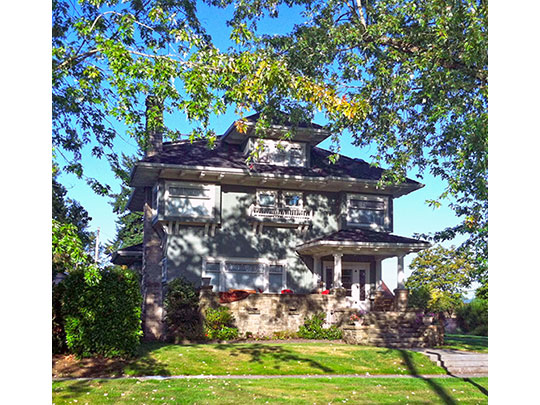 In the summer of 1851 Schuyler and Elizabeth (Tynan) Saunders staked a 640-acre claim on what is now downtown Chehalis. On May 8, 1859 Saunders established the first post office in the community he had named Saundersville. Judge Obadiah B. McFadden helped the area grow when in 1863 he went to Olympia and raised $1,000 to improve the road through Saunders Bottom. In 1870, McFadden renamed the town "Chehalis," an Indian word meaning "shifting and shining sands." However, the name change was not recognized by the territorial legislature until 1879. Chehalis became the county seat in 1873, a few years after William F. West persuaded the Northern Pacific Railroad to build through Chehalis instead of Claquato. A new courthouse was built in 1874. The first schoolhouse in Chehalis was built in 1876 at the southwest corner of State and Center Streets; the cost of this building was $600. A second schoolhouse, the East Side School—also known as "The High School," was opened in 1890.

The institution now known as Green Hill School received its first resident in 1892. At that time it was known as Washington State Reform School. In 1883, Chehalis was incorporated as a city under the territorial government, which allowed it to elect a mayor and "common council." In 1890, the city was incorporated under state government. In 1975 Chehalis voters adopted the city's present council/city manager form of government. Chehalis' first downtown was located on West Main Street because of its proximity to railroads. The second city center shifted down West Main Street, from the original area, to the corner of Chehalis Avenue and West Main Street. In 1892 two fires destroyed the second city center. The first fire burned one block of buildings and the second fire, only two months later, destroyed four blocks including thirty buildings.

The third city center was built along Market Boulevard where new buildings had just been completed a couple of years before the fires of 1892. In 1889 the first important commercial structure was built on Market Boulevard, the First National Bank. Between 1880 and 1894 Chehalis Land and Timber Company, with financing from the First National Bank, constructed the St. Helens Hotel at South Market Boulevard and N.E. Cascade. The original structure bought by L.J. Sticklin in 1916 and moved to the corner of Market and Division where it became an apartment complex. The St. Helens Hotel was then rebuilt by owner W.F. West. In 1910 new civic center, consisting of the city hall and public library was built at Market Boulevard between Cascade and Park Streets. The Northern Pacific Railroad built its new depot in 1912 at NW Front Way and West Street. (It now houses the Lewis County Historical Museum.)

Chehalis got its start as an industrial city very early on with logging, sawmills, and the farming of grain, hay, hops and fruit serving as the major commodities. It continued to grow and prosper, becoming the retail center for the surrounding agricultural area. The city's employment base diversified into industry, retail service, agriculture and county government.

During World War II, the community supported the war effort and Boeing temporarily established a plant in Chehalis. The Navy operated the airport during the war, utilizing it as an emergency landing field and training facility after major construction and renovation was completed by the government.