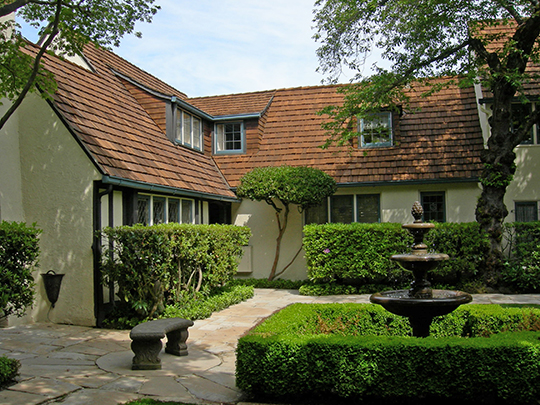 The Harvard-Belmont Historic District was listed on the National Register of Historic Places in 1982. Portions of the content on this web page were adapted from a copy of the original nomination document. [‡] .

The Harvard-Belmont Historic District encompasses a prime residential area on the west slope of Capitol Hill, one of Seattle's streetcar suburbs which blossomed during the first decade of the 20th century when the City's population rose dramatically from 80,761 in 1900 to 237,194 in 1910. While the relatively flat crown of the hill was platted for subdivision housing by an enterprising developer, James A. Moore, the west slope, which had been platted in the 1880's and 1890's, evolved into a prestigious neighborhood of large and gracious homes. Leading bankers, businessmen, and entrepreneurs purchased properties often consisting of four or six or more of the 50' x 100' lots and engaged the best local architects or sometimes fashionable eastern firms to design their handsome residences. These were built mostly along Harvard Avenue and also Belmont Place, especially near its juncture with Prospect Street.

A variety of architectural styles is represented in the district: Victorian, graceful neo-Classical, neo-Georgian, Colonial Revival, and a large number of Tudor houses that indicate the influence of the work of Richard Norman Shaw on the wealthy clients' concept of what a "grand manor" should be. More modest shingled and clapboard sided houses from this early period remain within the boundaries of the district, as well as a few pre-1900 wood-frame dwellings. One of the grand houses was built as late as 1922, but the decade of the 1920's saw the beginning of apartment construction on the western and southern edges of the district, a development which continued into the 1930's. These multiple-unit structures did not necessarily disrupt the character of the area, however, since their relatively modest scale and picturesque silhouettes (especially the Anhalt apartments on Belmont Avenue) tended to blend with the established streetscape. Institutional buildings of varied design, also built during the 1920's,mark the southeastern extremity of the district.

The Harvard-Belmont Historic District is significant to the City of Seattle as a well-preserved, essentially residential neighborhood which retains its individual identity as an area of fine homes built by the city's leading financiers, industrialists, merchants, and businessmen in the early years of the 20th century. The largest number of its residences were constructed between 1905 and 1910, and more than half of the total buildings within district boundaries date from the first decade of the century. The lively eclecticism and high quality of these houses gives the district an architectural integrity and visual continuity, while the commercially venturesome and socially prominent families who settled there impart a sense of the historical context during Seattle's most dynamic period of growth.

Venerable names in Seattle's history are associated with the early development of the area. The land was owned partly by David Denny, of one of the City's founding families, partly by Sarah Yesler, wife of Henry who built the first sawmill, and by John Leary, an early day mayor. The four additions which are included within district boundaries were platted between 1882 and 1892. The land had, of course, all been logged by then, and it was a barren wasteland which met the eyes of any prospective purchaser of a lot, though the site—on a high bluff overlooking Lake Union—appealed to some. Several wood-frame one and one-and-one-half story houses were built during these early years prior to 1900, and a few of them remain.