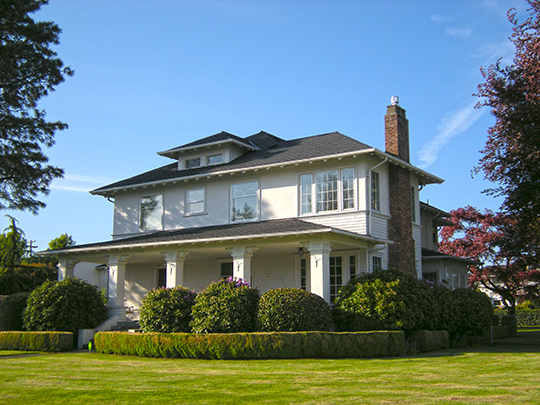 Enumclaw is a Salish word meaning "strong wind" or "thundering noise," derived from the strong evening wind blowing across the plateau from the mountains. This name came from the Native American groups who frequented the area and camped to the northeast of the present city limits.

When Allen Porter arrived in 1853 and settled 320 acres three miles west of the present city, he found a settlement of about 300 Native Americans living in the area. This native group lived there for part of the year and ranged over the whole region for their livelihood. They lived on salmon and other fish, game, seasonal shellfish, kelp, bulbs, roots, and berries. They also managed the landscape by prescribed burning of the underbrush to encourage the growth of the preferred food-producing plants.

In 1879 Frank and Mary Stevenson settled a 160-acre homestead in the Southwest Quarter of Section 24, starting a process of change for the plateau. Joe and Oscar Welch, and Charles Lee homesteaded the other quarter sections of Section 24 a few years later. In 1884-85, the Stevensons created a plat for the town of Stevensonville, but ultimately named the community Enumclaw. During this platting period, land was donated to the Northern Pacific Railroad in hopes that the town would be a rail-based center for the area's abundant farmland, forests, and mines. This offer created the reality of a rail siding for switching railcars.

The town quickly grew with a two-story hotel, and a saloon and a general store following close behind. Land was donated for Calvary Presbyterian Church (and for other churches), a school, and the White River Lumber Company. The town incorporated on January 27, 1913. Since incorporation, the City of Enumclaw continued to grow and expand as a rural center and distribution point for the resource-rich area. Brick buildings replaced the original wooden structures along Cole Street in the 1920s.

Enumclaw is the gateway to the north and west entrances to Mt. Rainier National Park, established in 1899 as the fifth National Park. Present day Chinook Pass was opened in 1929, and established Enumclaw as a tourist stop and gateway to the mountains. Downhill skiing became popular soon after the pass was opened. In 1958, Crystal Mountain ski area opened for both winter and summer activities.

The area has continued to grow as a tourist stop, horse-breeding center, and also as a rural residential area with easy access to city amenities. The community now offers all city services and provides retail, medical, cultural, educational, and recreational facilities. The community of Enumclaw has grown from its birth in 1879, and established its position as a vital, rooted, and unique community.

Rivers and Mount Rainier shaped Enumclaw and the surrounding area. Historically, the area has been intermittently unstable due to glacial action, flooding, earth movements, and volcanic upheaval. Approximately 4,600 years ago a major mudslide completely altered the landscape of the river valleys, creating the present plateau. People have inhabited the plateau since about 3000 B.C., drawing on the area's abundant wildlife and vegetation as part of their itinerant lifestyles. Mt. Rainier erupted approximately four times in the last 4000 years with the most recent eruption of steam and ash occurring in the 1840s. Despite the area's geological volatility, people eventually settled and continue to inhabit it.