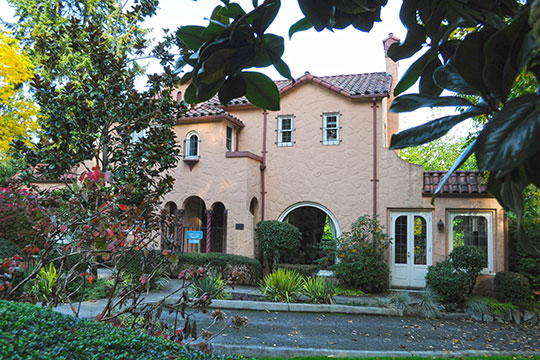 Bellevue is generally regarded as a suburb of the City of Seattle It was founded in 1869 and incorporated in 1953.

When viewed from the air, Bellevue clearly fulfills its image as a "City in a Park." Lying between Lakes Washington and Sammamish, interlaced with miles of urban forests, open streams, wetlands, freshwater lakes, and foothills rising to almost 1,500 feet, Bellevue is blessed with a rich natural environment. The city treasures and protects these natural places, maintaining more than 2,432 acres—nearly 10 percent of its land area—in city-owned open space, including natural areas and developed parks, greenbelts, and wetlands. Even in the heart of the downtown business district, Bellevue's Downtown Park provides a green respite, an informal gathering place and a popular location for special events and celebrations. Abundant vegetation softens the impacts of commercial areas and blends them into the natural environment. Bellevue's strong commitment to environmental stewardship will be tested as the city grows and changes. Redevelopment and change present an opportunity to help maintain the balance.

Bellevue is a great place to live, and in 2014, there were more than 55,600 households in the city. Residents choose from a variety of housing types and living environments, ranging from quiet, older neighborhoods to the new high-rise communities Downtown, to modern view homes on Cougar Mountain near Bellevue's southern edge. Convenient and family-friendly neighborhoods offer excellent schools and neighborhood amenities. Within this range of housing types, the community provides options in senior and assisted housing for residents who wish to stay in Bellevue as their housing needs change.

Bellevue is now a major employment center, with a local workforce of about 140,000 people. The city's regional shopping centers and large commercial areas—including Downtown, Eastgate/Factoria, Wilburton/Bellefield, and SR 520/Bel-Red Road—provide jobs for workers from throughout the region. Large community retail and mixed use centers at Crossroads and Factoria serve the shopping needs of the entire city while smaller centers provide goods and services to homes in their immediate area. The vibrant economy not only bolsters employment, but also helps keep city tax rates low.

Bellevue's Downtown is among the Northwest's most distinctive business districts, featuring a successful mix of office towers, stores, theatres, restaurants and hotels, along with such cultural facilities as museums, the regional library, and Meydenbauer Convention Center. An increasing number of people live in Downtown, where new apartment and condominium complexes are coalescing into true urban neighborhoods. A majority of the city's future growth is planned to occur Downtown as it continues to redevelop. A challenge for the city will be to continue to support Downtown with the amenities, access, attractions and options that make it a desirable place to live and work.