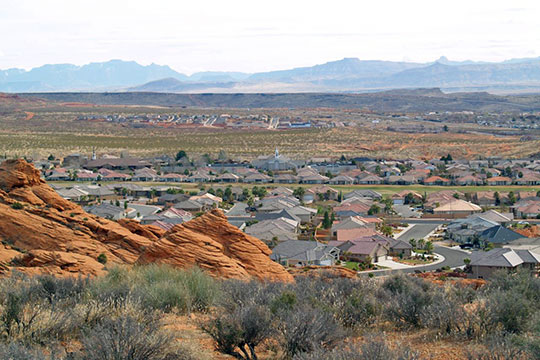 Washington City, named after George Washington, was settled in 1857 by 38 Mormon families who were sent to the area by Brigham Young to raise cotton1. The first settlers were moderately successful and later began raising peaches, grapes, vegetables, and sorghum for molasses. Although relatively successful in growing, they were plagued by malaria and were unable to control the flooding of the Virgin River.

The first public building that was built in Washington City was a bowery constructed on the public square. This bowery came to be a meeting place on Sundays for Mormon residents and was later replaced by a permanent chapel in 1877. The early residents of Washington City enjoyed a number of social events, including a town choir, baseball, foot-racing, and horse racing.

During the 1860s, many industrial projects sprang up in Washington City. These included a combination grist mill/sawmill and a cotton mill. The cotton mill, constructed in 1856, served as a place for residents to gather and exchange goods. The cotton mill closed once the railway reached Utah, forcing many people to move away from Washington City and thereby greatly decreasing the City's population.

In 1891, the Washington Fields Dam was constructed in order to tame the Virgin River, which had been flooding the City on a regular basis. Stone irrigation ditches and the Civilian Conservation Corps Dam provided early Washington City residents with water. The City later built its first municipal sewer collection and disposal system in 1972, which consisted of lagoons in the Washington Fields. In 1982, the City connected to the St. George regional treatment facility and the Washington Fields lagoons were abandoned.

Agriculture began to lose its predominant role in Washington City's economy after Zion National Park was established in 1916. Zion National Park, along with the Pine Valley Wilderness Area and Dixie National Forest, Snow Canyon, Gunlock Lake, and Quail Creek Lake led to Washington City's present economy which is based primarily on tourism, retirement, and services. Washington has continued to grow to become the second largest community in Washington County. The City has become a residential and consumer service center for the entire Dixie region.