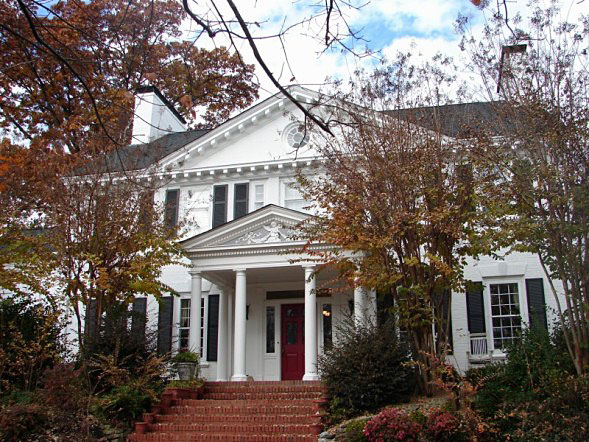 Johnson City, a trade center and shipping point for a lumbering and farming area, partly dependent for employment on railroad division shops, began to grow rapidly after the establishment of the rayon plants in Elizabethton to the east. Large numbers of people who came to work in the Elizabethton plants could not find quarters in the boom city and decided to live here and commute. New stores were opened to accommodate the increased population and various new businesses came into existence — box factories, tanneries, lumber yards and lumber mills. The result is that the center of town, which is cut by the tracks of the three railroads converging here, has a brisk, modern appearance. The homes are on higher ground, many on streets shaded by hardwood.

The downtown streets are particularly lively on Saturday when everybody for miles around comes in to shop and to see a movie; the mountaineers are easily identified by the dark tan of their lean faces and by the blue jeans they usually wear.

The first settler in the vicinity was David Jobe, who came to Watauga about 1777, but settlement of the region progressed slowly until 1854, when Henry Johnson, for who the city was later named, arrived from North Carolina, and opened a store in the settlement then known as Blue Plum. After the East Tennessee and Virginia Railroad, now a part of the Southern, built a water tank here in 1858, Johnson saw an opportunity to sell his land at a profit; and at his own expense, he constructed a depot for the railroad. Trains were soon scheduled for a stop at Johnson's Tank, or Johnson's Depot.

During the Civil War the town, then called Haynesville in honor of Landon C. Haynes, a Confederate States Senator from Tennessee, saw much military activity but the wartime boom was soon over. After the close of the war, Henry Johnson renewed his activities for the development of a city. For some years he served as postmaster, depot agent, merchant, hotel keeper and magistrate. In 1869 a charter of incorporation was granted to Johnson City, and Johnson was elected the first mayor.