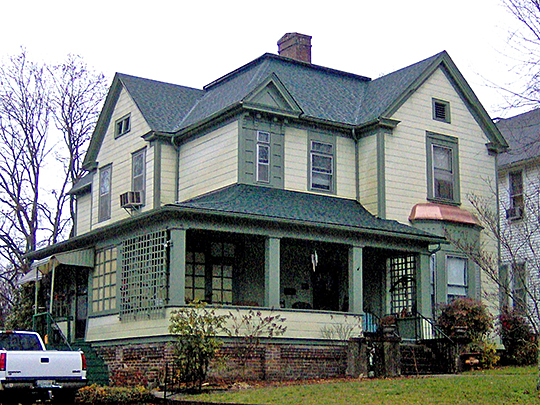 At Big Emory Gap, in Roane County, Tennessee, where the Emory River breaks its way through Walden's Ridge, after its rapid descent from the Cumberland Plateau, it was ordained by nature that a town should be. Colonel Byrd, who here held large ownership of land, always thus insisted, and died firm in such faith. Here, with the coal close at hand on the west and on the north, and with iron nearby on the east and within ten miles to the south, there was every essential condition for the establishment of a city with the purest water supply, the best natural drainage, picturesque surroundings and admirable climate. And here the East Tennessee Land Company located Harriman, within a crescent formed by the Emory River, between the Cincinnati Southern Railway on the west and the Walden's Ridge division of the East Tennessee, Virginia and Georgia Railway on the north; fifth miles west of Knoxville, via this latter line; eighty miles north of Chattanooga, and 255 miles south of Cincinnati, via the Cincinnati Southern Railway.

In this favored spot, in a State largely defended from saloon influences by the Four-mile Law, certain well-known advocates of Prohibition had resolved on creating an industrial town, where labor should have its own, where homes and churches and schools might find their highest chance, free from liquor traffic. Chief among these men determined on combining a great moral and economic principle with an extensive commercial enterprise, for its clear demonstration and for the best industrial results, was General Clinton R. Fisk, who had been the Prohibition candidate for President in 1888, and whose military service in Tennessee, as Freedmen's Commissioner in command of the entire State at the close of the war, had given him a strong hold upon its people, and a high opinion of its advantages and future.

On the 7th of February, 1891, Harriman was incorporated as a city, by special enactment of the State Legislature, approved by the Governor March 6th, ensuing. Having adopted their special charter, by an almost unanimous vote, on the 2nd of June thereafter, the City Government was chosen by its citizens at a special election where 736 votes were cast, 12 of them by ladies, asserting their right of suffrage under a general State law, which everybody outside of Harriman had forgotten, and because of a special condition which the charter contains.

The census of 1890 credited Harriman with a population of 719. In December, 1891, the first city directory was compiled, and its compiler took a house-to-house enumeration which showed 3,672 residents, not counting the miners' families opposite. At this date the residents number not less than 4,000.