Photo: Town Square, Columbia TN, part of the Columbia Commercial Historic District. The District was listed on the National Register of Historic Places in 1984. Photographed by User:jdj150 (own work), 2007, [cc-by-2.0 (creativecommons.org/licenses/by/2.0)], via Wikimedia Commons, accessed April, 2013. 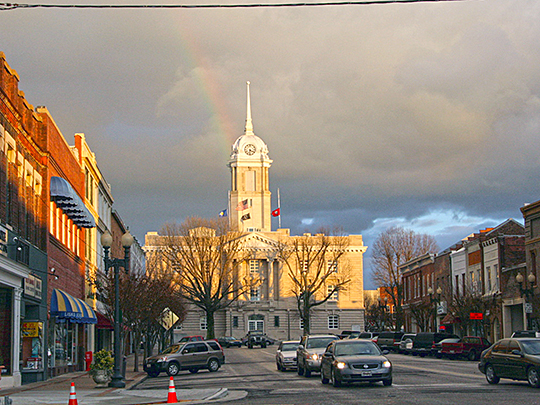 By act of the legislature in 1808 commissioners were appointed for the purpose of selecting a county site. They were Joshua Williams, William Frierson, Isaac Roberts, John Lindsey and Joseph Brown. The site of the present Columbia was chosen. After the town was started, Indians came in droves to trade. The first physicians of Columbia were Doctors O'Reilly and Estes. Somewhat later came Doctors DePriest, McNeil, Sansom, McJimsey and Graves. The place was incorporated in 1817. The first paper, the Western Chronicle, was founded in 1811 by James Walker, who, in 1813, married Miss Jane, a sister of President Polk. Columbia had a population in 1910 of 5,754.

In the first Seminole war (1817) Captain John Gordon raised a company of spies which saw service. In the second Seminole war two companies of men were raised, commanded by Captain W. J. Frierson, and Captain J. B. Hamilton (later by Captain George Lipscomb). When the war with Mexico cam one, many Maury countians volunteered, but only Captain A. G. Cooper's cavalry company was accepted. In the war between the states the volunteers from the county were numerous indeed.