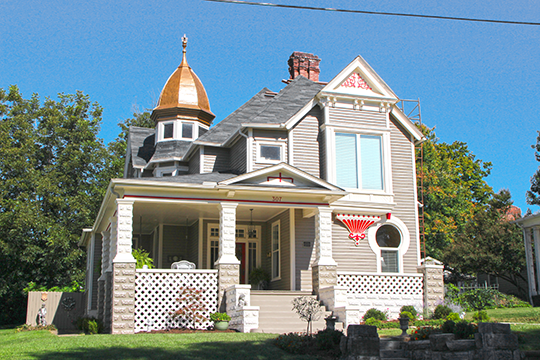 Morristown, seat of Hamblen County, was named for three brothers, Gideon, David and Absalom Morris who settled here in 1783.

The town is in a fertile valley enclosed by the Clinch Mountains where dairying and poultry-raising are of importance. The famous "milk-fed broiler" originated in this area. Carloads of fryers are sent out by rail and a fleet of specially-constructed motor trucks rush chickens and turkeys to New York and other eastern markets. This business is carried on by both private business concerns and by a Farmers Cooperative Poultry Association.

Large amounts of burley tobacco are sold in the town's six warehouses; tobacco is the leading cash crop of the county. There are more than 30 industrial plants which can vegetables, process silk, cotton and leather, manufacture staves and barrel heading, woodworking and finishing, and shell walnuts.

The town owns and operates its own water works and electric lighting system; utility rates are low.

The Morristown Normal and Industrial College, east of James Street at East 6th Avenue, was chartered in 1909 and is the only college with both white and Negro teachers maintained in the South by the Methodist Episcopal Church. The institution, an experimental junior college for Negroes, has about 120 students. Its 10 buildings are on a 7-acre campus and a 320-acre farm.

Since about 1917 the Progressive Teacher, a widely circulated magazine, has been printed here at the Triangle Press Plant, which also prints the nationally distributed Augsburg spelling books and some art books.