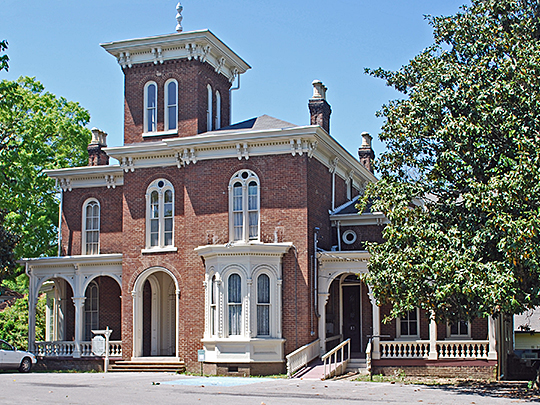 Cleveland, seat of Bradley County, was named for Colonel Benjamin Cleveland, who commanded a regiment at the Revolutionary War Battle of King's Mountain. Cleveland is part of the last area evacuated by the Cherokee Indians who left in 1838; the town was incorporated that same year.

Like many other towns in East Tennessee, Cleveland is an industrial community. Among the more than 30 industrial plants are hosiery mills, wood working and lumber plants.

The Public Library has about 15,000 volumes, including the John Morgan Wooten collection of books on history, biography and Indian lore.

The Hardwick Woolen Mills was established in 1880, spinning and dying raw wool, weaving woolen cloth, and manufacturing it into garments.

Bob Jones College, on a landscaped campus in the residential district, is a co-educational, interdenominational institution, founded in 1933 by Bob Jones, an evangelist who is the president of the institution. Each teacher must annually affirm his belief in a fundamentalist interpretation of the Scriptures and all classes are opened with prayer. This school occupies the buildings of the Centenary Female College, which was operated from 1885 to 1928 by the Methodist Episcopal Church, South. The four central buildings constructed for the Female College are large brick structures of simple design. Since 1933 five brick buildings have been added.