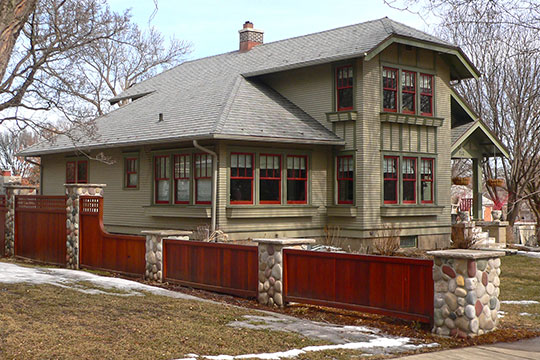 Yankton was the capital of Dakota Territory before South Dakota and North Dakota were divided, and much of the State's early history had Yankton as its setting.

In March 1858 George D. Fiske, representative of a fur company, pitched his tent near the Missouri River, becoming the city's first permanent white settler. Sixteen cedar rafts were floated down the river from Fort Pierre, out of which a trading post was built near the present Meridian Highway bridge. The Yankton Sioux Indians, led by Smutty Bear, gathered at Yankton in 1859 to pro test being removed to reservations. A satisfactory agreement was reached, with the presentation of some trinkets by the U. S. Agent, and settlers moved into the region. The town was surveyed in August 1859, and construction of more buildings was begun to augment the two log cabins there. On Christmas Day, 1859, the first tavern was opened where the Merchants Hotel now stands ; in fact, the original structure is part of the present building. An unusual character of those days was James Witherspoon, a bachelor, locally known as Limber Jim; it is said that he walked to Washington, D.C., to procure the patent to his land, now known as the Witherspoon Addition.

Yankton was selected capital of Dakota Territory in 1861, and when the first Legislature met, nicknamed "The Pony Congress," the upper house convened in the William Tripp residence. The house has been removed to the city park, restored to its original condition, and is used as a museum. The lower house met in the Episcopal chapel. The first copy of the Weekly Dakotan was printed June 6, 1861.

An Indian uprising in 1862 resulted in the erection of a stockade, 450 ft. square, at Third and Broadway, and residents of Sioux Falls and Yankton gathered there for protection. After the excitement subsided, the prosperous city grew steadily.

The streets of Yankton are unusually wide, some 130 ft., with boulevards of flowers and shrubbery. A Negro community lies in the northwestern section of Yankton. The people own their homes and have two church buildings. Some of the young people are athletic stars in the city schools.

The site of the Capitol of Dakota Territory is marked by a bronze tablet on polished granite at Capital and Fourth Streets. The original two-story building was frame.

Yankton College (Congregational) is the oldest institution of high learning in the Dakotas, having been founded in 1881 by Dr. Joseph Ward. The Conservatory of Music is considered one of the 3 best in the Midwest. The college has an attractive campus.