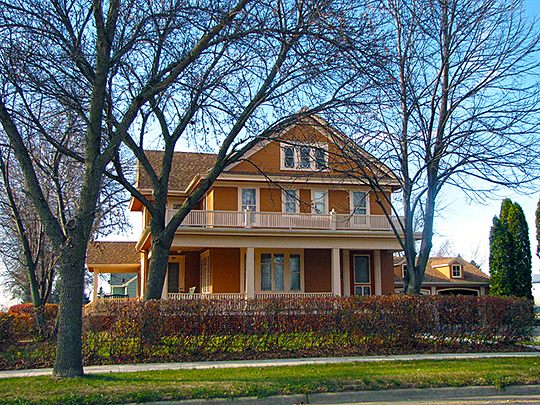 Volga was named for the Volga River in Russia, though the people of the community are not of Russian descent, but Scandinavian.

A story is still current in Volga about a salesman from Chicago who, in 1880, came to Volga for the first time. Learning of a trading post at the inland town of Oakwood, he hired a livery team and drove there. It was apparent that he expected to find the country wild and woolly, and during the evening some of the local men concluded that it would be too bad if he returned disappointed. He was taken to Charlie Porter's drug store, where a group of men were apparently gambling for high stakes under the influence of liquor. Suddenly a violent quarrel started and Porter rushed behind the counter, returning with a huge cheese knife. Another man came reeling out of the back room, swinging a double barreled shotgun. Three men rushed at him, when both barrels were discharged into the ceiling. This was too much for the salesman, who bolted out of the door for the livery barn, forget about collecting his money, never to return.