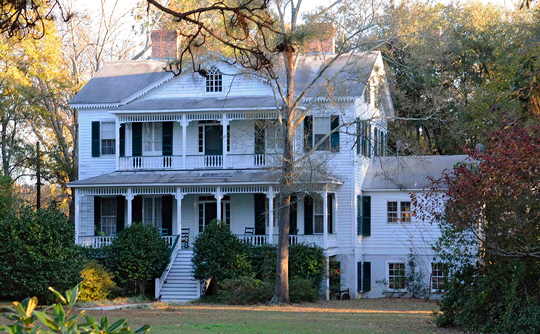 The appearance of the town of Bennettsville, with the Marlboro County Courthouse at its center, aptly reflects the history of the town. Established as the county seat in 1819, Bennettsville continues to serve as a political and economic center for the county.

In 1785, Marlboro County was created by an act of the South Carolina Legislature. The first courthouse was erected near the Pee Dee River. This place proved unsuitable, however, and on December 14, 1819, the Legislature authorized the building of a new courthouse "... upon the great road leading from Society Hill to Fayetteville, near Crooked Creek, in or near an old apple orchard on the lands of John S. Thomas."

Thus, the town of Bennettsville was established, being named in honor of Thomas Bennett, governor of South Carolina from 1820 to 1822. Residences, hotels, and stores were established around the courthouse square. According to one account, by 1860, Bennettsville was "a village of about thirty residences, besides three churches, Methodist, Baptist and Presbyterian; two lodges, Masonic and Temperance; about six stores lying around the Square, several offices and one or more blacksmith and wood shops. The town boasted of two good schools, a male and female academy, under the management of first-class teachers."

Following the War Between the States (when part of the town was burned), Bennettsville experienced a period of much growth and change. In the 1870s and 1880s railroads were constructed, linking Bennettsville to other areas. During this period cotton production began to boom in Marlboro County, and Bennettsville became a transportation center for the cotton market. Bennettsville became a prosperous town, and this new wealth was reflected in its growth. An 1897 account reported "... to-day Bennettsville bears no resemblance to the town of thirty years ago. She has lengthened her cords and spread out east, south and west; new streets have been opened, houses built, and either east or west Bennettsville has more inhabitants now than the whole town had in 1866. What changes have taken place in thirty years! ... Where dilapidated stores, shops and small offices stood around the public square, handsome brick stores and elegant blocks of brick buildings now stand. Handsome residences now thickly dot the ground upon which crops of cotton and corn were cultivated ... Bennettsville is now in communication with the outside world. Two railway lines offer transportation for freight and passage north and south."