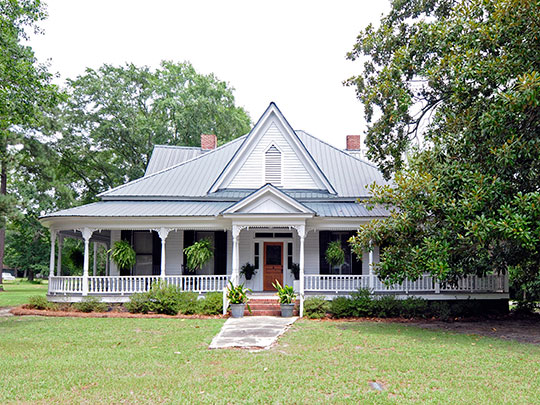 The towns of Batesburg and Leesville merged in 1992.

Located on an east-west axis parallel to the Southern Railroad line, both towns straddle the Saluda River basin ridge in western Lexington County. The towns share modified street grid patterns, emanating from the old railroad track which bisects both communities. Although they have long been promoted as the "twin cities" because of their contiguity and common development around the Columbia, Charlotte, and Augusta Railroad established in 1869, the two towns developed almost independently during their formative years. They were separated until the early 1970s by a 500 yard wide unincorporated swath, which has since dwindled to a few hundred feet as both municipalities have extended their city limits.

Both towns served as markets for the surrounding agricultural areas in the late nineteenth century, but the Leesville commercial center has been extensively modernized with little remaining in the surviving turn of the century stores to evoke the town's Victorian beginnings. The commercial core of Batesburg, however, with most buildings dating from the early years of the twentieth century, remains largely intact. Most of the historically and architecturally significant properties remaining in the two towns are residential buildings although the resources also include three educational buildings, and two religious buildings.

A slightly older community, Leesville had its genesis as an eighteenth century tavern and stagecoach stop. The town, which was incorporated February 24, 1875, served as an agricultural trade center in the nineteenth century. Immediately east of the town of Batesburg, Leesville has traditionally been more oriented than Batesburg to the rest of Lexington County in commercial intercourse. Its has served nearby sandhills farms to the east and south as a market for peas, peanuts, corn and timber.

The establishment of Leesville English and Classical Institute (later Leesville College) in 1881 was a major impetus to the growth of Leesville. The prevailing late Victorian character of sections of the town stems from an influx from surrounding counties between 1880 and 1910 of families setting up residences to take advantage of educational opportunities afforded their children by the new institute. By 1883 Leesville had a population of 177 and contained sixteen stores. By 1923 the town, which remained largely a center of agriculture, boasted a population of about 1,500.

Prior to the coming of the railroad, the Batesburg town area was owned by four large land owners: Lodwick Hartley, Joel Ridgell, Jack Bates, and J. A. Mitchell. In 1872 three stores, a hotel, and four dwellings comprised the village. Incorporated May 31, 1877, Batesburg had nineteen stores by 1883. Located on the western border of Lexington County, Batesburg served as a market for adjoining counties. By 1900 there were thirty-three stores, of which thirteen were brick.

The town's primary growth generator was the establishment in 1900, immediately east of the town, of the Middleburg Cotton Mill and its operatives' residential village. The mill has been in continuous operation since its founding.

Leesville, which was the site of Captain John Lee's Tavern, at which George Washington reputedly stopped on his 1791 tour, derives its name from the Lee family. The community evidently grew slowly before the late nineteenth century; by 1883 the population was only 177. The Mitchell-Shealy House constructed ca. 1855 by J. A. J. Mitchell, prominent local planter and first postmaster of Leesville, is one of the few remaining antebellum residences in Leesville. Another early Leesville residence, the Bodie-Crawford House was constructed ca. 1870 as a residence for Byron B. Bodie, who served as postmaster, depot agent, and intendant of Leesville.

Leesville has traditionally been more oriented than Batesburg to the rest of Lexington County in family ties and cultural traditions reaching from the county's colonial Swiss/German settlement. Like the remainder of Lexington County, Leesville has historically been predominately Lutheran in church affiliation. The community's first school, the Busbee Brothers' School was established in 1878 by the Reverend Levi Busbee, a Lutheran minister, and his brother Dan.

Most of the residences included in the multiple resource nomination were constructed between 1880 and 1910. During this period Leesville developed as a market for the agricultural area of Lexington County to the east. The imposing Henry Franklin Hendrix House, enlarged ca. 1907 in the Neoclassical style, reflects the prosperity Hendrix enjoyed as a merchant and president of the Bank of Leesville at the turn of the century. The neighborhood that developed around the institute in the late nineteenth and early twentieth century retains its character.

Many of the first residents of Batesburg came from Edgefield and Aiken Counties. The town was first called Batesville but changed to Batesburg to avoid confusion with another Batesville in the state. It is thought that the town was named either for Captain A.O. Bates, first mayor and railroad agent and Methodist preacher, or in honor of the brothers John and Andrew Bates. The town's oldest extant building is the Bond-Bates-Hartley House, which, according to local tradition, was built by John Bates's father-in-law, John P. Bonn, in the 1790s. However, it appears to have been constructed or extensively remodeled ca. 1830.

The town, which developed as an agricultural market center after the establishment of the Columbia, Charlotte, and Augusta Railroad in 1869, experienced a period of growth and mill has been in continuous operation since its founding. The population of Batesburg, which was 971 in 1900, had increased to 1,995 by 1910 and to 3,000 by 1920.