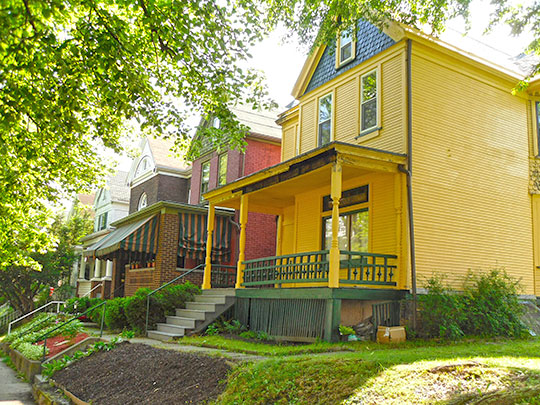 The town is built in a hair-pin bend of the Kiskiminetas River, on an irregular piece of topography shaped roughly like the convex side of the bowl of a teaspoon. To the north and east of the town, level sections of land along the river are occupied by a large steel mill and a foundry, respectively. Along a level section to the southeast, separated from Vandergrift by a steep hill, is the tiny, contemporary, but architecturally and historically separate small town of East Vandergrift. Up the hill to the southwest, the town continues beyond the historic district, where three or four separate neighborhoods (including Vandergrift Heights) have been laid out along rectilinear street grids. Across the river is a village called North Vandergrift, east of which is the older mill town of Apollo and west of which is the town of Leechburg.

The original town, as planned by Olmsted, built by Apollo Iron and Steel and its workers, and included in this district, consists of about ten long blocks of residential and/or commercial lots, delineated by about twelve major streets. The ten blocks are surrounded by one additional row of building lots around the entire perimeter of the original plan. The streets are curvilinear, curving around the corners of the blocks. Seven of the blocks are long and generally rectilinear, with the long sides slightly curved and the ends almost semi-circular. The remaining three blocks are triangular. The lots are generally narrow and deep, reaching back to the narrow alleys that dissect each block. Washington and Lincoln Avenues run parallel along the northwestern edge of the district, with a park between them that stretches from the Casino (borough building) near the center of the northwestern edge to the train station at the northern corner of the plan. Some of the commercial are along Lincoln and Washington Avenues, especially behind the Casino, though most of the commercial structures are along Grant Avenue, which extends southeast from the Casino into the center of the plan.