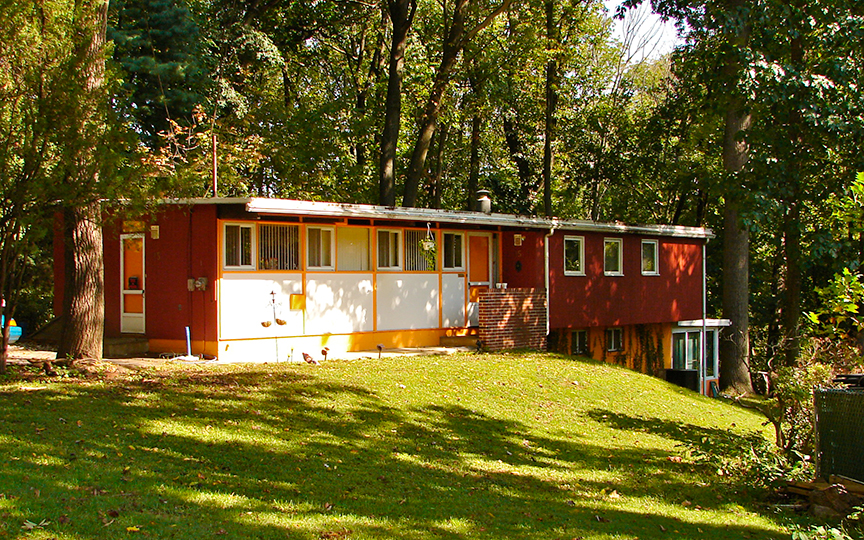 Greenbelt Knoll is a nine-acre development of 18 modest frame, one-story Modern houses constructed in 1955 and 1956 in suburban northeastern Philadelphia [Holmesburg neighborhood]. The single-family homes are clustered efficiently along Longford Street, a cul-de-sac, on lots of approximately one-third acre each. The asphalt-paved cul-de-sac is accessed via the south side of Holme Avenue and is approximately 500 feet in length. It follows a north-south ridgeline and is bordered by concrete sidewalks. The development is heavily wooded and is bordered on three sides by the Pennypack Park Greenway. The siting of the houses and division of parcels was determined by the topography of the knoll, which drops off considerably to the west and south. Placement of the houses was intended to limit the removal of trees and incorporate the existing landscape into the design. Seventeen of the existing homes are considered contributing; one home was completely rebuilt following a fire and is considered non-contributing

Greenbelt Knoll was designed by the prominent firm of Montgomery & Bishop with architect Harry Duncan, landscape architect Margaret Lancaster Duncan, and consultant Louis I. Kahn, the houses and landscape at Greenbelt Knoll are excellent examples of the organic vein of mid-century Modern architecture. Set in a wooded area and isolated from its neighbors, Greenbelt Knoll is one of the most important concentrations of residential Modernist buildings in Philadelphia.

The houses in Greenbelt Knoll were constructed during 1955 and 1956. The house at 4 Longford Street, the model house for the development, was erected first. The Department of Licenses & Inspections issued zoning and building permits for the model house in the spring of 1955. Greenbelt Knoll won several awards for design excellence. For example, the American Institute of Architects, House and Home, Better Homes and Gardens, and the National Broadcasting Corporation bestowed its Homes for Better Living award on the development. Also, Philadelphia's Mayor Richardson Dilworth, an ardent advocate of exceptional planning and design, conferred a City of Philadelphia Tribute on Montgomery & Bishop. He gave the tribute "for the design of Greenbelt Knoll Homes, which ... brought new standards of contemporary residential architecture to Philadelphia."