Photo: Elfreth's Alley, the oldest residential street in the United States, Philadelphia, PA The Elfreth's Alley Historic District was listed on the National Register of Historic Places in 1966. Photographed by User:Beyond My Ken (own work), 2013, [cc-by-4.0 (creativecommons.org/licenses/by-sa/4.0/deed.en)], via Wikimedia Commons, accessed February, 2017. 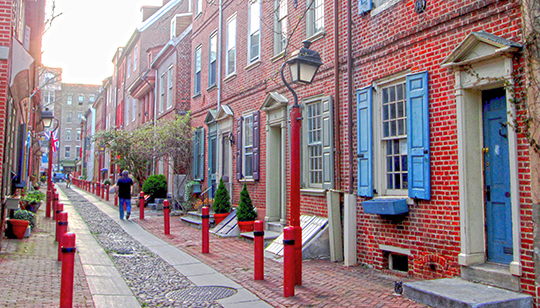 Elfreth's Alley [‡] was recognized as a National Historic Landmark as early as 1966.

The dwellings fronting Elfreth's Alley are a unique representation of Philadelphia architecture. Half of those now standing were erected either before the middle of the 18th century or before the opening years of the Revolution, while the other half were constructed in the post-colonial and Federal years. For more than 250 years Elfreth's Alley has been continuously occupied. The population today numbers almost 100 persons.

The houses, of two and three stories, are typical urban dwellings of the period with their facades flush on the sidewalk, low ceilings and deep cellars. Elfreth's Alley is a remarkable survival of colonial America which can be viewed today in an unexploited, authentic atmosphere.

Elfreth's Alley itself was opened between 1702 and 1704 by mutual agreement between Arthur Wells and John Gilbert, both of whom lived on Front Street. Wells donated 5 feet of land extending from Front to Second Streets on the south side of the intended alley, while Gilbert, who owned the land on the north, donated 10 feet. Because Arthur Wells died shortly after the alley was laid out, it was first known as Gilbert's Alley. After his death it came to be called Preston's Alley, for Paul Preston, who had married Gilbert's widowed daughter-in-law. Not until about 1750 was it commonly called Elfreth's Alley, for Jeremiah Elfreth, who then lived on Second Street just north of the alley. His first wife had been a sister of Paul Preston's wife, and his fifth wife was the widow of a grandson of Arthur Wells. Through these two wives, Elfreth had acquired title to land on both sides of the alley at its Second Street end. From this time the alley has been known by his name.

It is obvious that none of these little houses were the dwellings of wealthy merchants or prominent members of society but were occupied by artisans and tradesmen. Many of them stayed here only a year or two, although others lived out their lives on the alley. Yet the houses themselves have survived, practically unchanged, while the city around them has altered to such an extent that only a 'vestige of its original character remains, leaving the alley a present witness of the past.

To preserve the alley as one chapter in the annals not only of Philadelphia but of America, the Elfreth's Alley Association was established in 1934 as a non-profit organization, its membership open to all. In succeeding years, the association acquired title to the two eastern most houses on Bladen's Court: No. 1 and 2, better known as the, Spinning-Wheel House, No. 114, where Daniel Trotter lived for 30 years; and No. 124, occupied by the chair makers Gilbert Gaw and John B. Ackley in the 1790's. The rental income derived from these four properties is used for their maintenance and for the upkeep of the association garden in the rear of Bladen's Court.

Late in 1957 the association, believing that tradition and legend should be bolstered by fact, agreed to engage a researcher to investigate the history of the alley and its colonial residents. Title searches were made to establish the physical development of the alley and definitive historical and genealogical research begun to determine the background, relationships, and activities of the people who lived on and were associated with Elfreth's Alley.

By the time tbe alley came to be known by Elfreth's name, most of tbe present dwellings on the south side and two on the north side, at the west corner of Bladen's Court, had been built. Of these, the two oldest surviving dwellings on the entire alley are No. 120 and No. 122 on the south side. Undoubtedly, Benjamin Franklin frequently visited the latter house, for William Maugridge, the tenant from 1728 to 1731, was one of the original members of Franklin's Junto.

The next oldest bouse is probably No. 108, built sometime after 1725 and before 1750 by Thomas Wells, a shipwright. Across tbe street on tbe north side, the two-story house at the northwest corner of Bladen's Court, No. 117, was probably built about 1734 by William Parker, a young blacksmith; the house next door, numbered 119, was built between 1737 and 1747. This house was purchased in 1757 by Matthias Meyer, a German potter from Hillsbach. His daughter Hannah was married here in 1770 to Rev. John Peter Gabriel Muhlenberg, the "fighting parson" of Revolutionary fame.

Next in age are tbe two houses numbered 130 and 132 across the alley on the south side near Second Street. These were built for income producing purposes shortly after 1741 by Adam Clampffer, a German shopkeeper who lived on Second Street nearby. He and his heirs rented both properties to a succession of tenants until after the Revolution. By the middle of the 19th century, the narrow little house now No. 134 bad replaced the original frame tavern and shop erected long before the Revolution. Sometime between 1753 and 1755 Richard Hall, a house . carpenter, built the house numbered 118. Jeremiah Elfreth built No. 124 and the original dwelling at No. 126 between the years 1741 and 1762, when he sold both properties.

Down toward Front Street, Nos. 110, 112, and 114 were erected sometime between 1757 and 1762 by Thomas Patterson, another house carpenter. The three-story house at No. 116 represents the post-colonial period. It was built in 1785-86 by the brothers Benjamin and Enoch Taylor, who were bricklayers and masons. Across the street, No. 137, near Second Street, was built in 1789 by the cabinet maker Josiah Elfreth, a grandson of Jeremiah Elfreth. The house adjoining on the east, No. 135, is known as the Coach House from the high arched passage that originally led back to stables belonging to Jeremiah Elfreth's house on Second Street. In 1811 tbe premises were described as "brick stores" owned by a distiller, John Angue, who had purchased the frame shops and the Elfreth dwelling, fronting on Second Street, in 1805. Whether the present house is identical with the brick stores or was erected after 1811 bas not been definitely established.

The next two houses, Nos. 113 and 115, were probably built between 1805 and 1809 by Ephraim Haines. Haines had purchased the two lots in the autumn of 1805, at which time they included two brick stables. That on No. 113 had been erected in 1763, while the one on No. 115, standing since 1748 when the premises included "a large smith's shop ... with four good forges, good stable and garden behind the same, " was then owned by the blacksmith William Parker, who was living in No. 117.

Bladen's Court, separating these last two properties, was opened between 1749 and 1753 by Abraham Carlile and Thomas Maule. The latter had recently purchased No. 117 from Parker but lived in Front Street north of the alley and next door to Carlile. Both their Front Street properties extended west this far. Carlile had the dubious distinction of being one of the two Loyalist Quakers hanged in 1778. During the British occupation of Philadelphia in 1777, he had served the British as a keeper of the city gates at the north end of town. A house carpenter and original member of the Carpenters' Company, he may have built the Spinning" Wheel House at the north end of the court, for it stands on what was once his property. The remaining houses in the center of the north side of the alley represent the Federal period of domestic architecture.

The most perfect existing examples of the City house type of row house plan occur in these Elfreth's Alley houses, especially at numbers 113, 115, 130 and 132. In these structures the door is placed as usual in one side of the street facade and gives entrance to the front building. This is one room deep with fireplace located on the rear or side wall, opposite the door. The stairs are not in this chamber but in an area behind called the "piazza." This element is often narrower than the back buildings and forms a connecting link between them and the front block. By their slimmer proportion these backbuildings create a long yard or alley. Access is gained to the rear yard and backbuildings by a passage between houses, a characteristic of all but the Bandbox plan of the Philadelphia row house.

Elfreth's Alley, Registered National Historic Landmark is about 475 feet long from west to east, 285 from north to south, and covers about 3 1/2 acres.