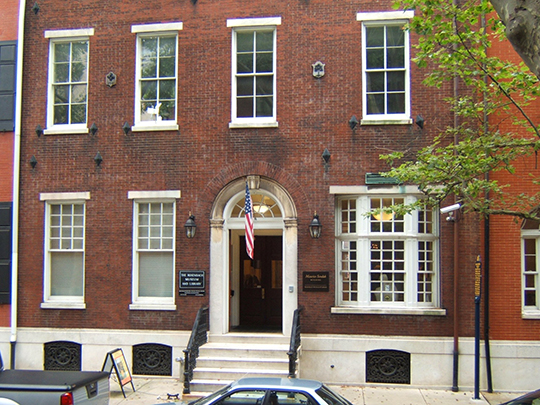 The row homes of 2000-2018 Delancey Street (Philadelphia 19103) were listed on the National Register of Historic Places in 1982. Portions of the content on this web page were adapted from a copy of the original nomination document, NR #82003809,

The houses on the South side of Delancey Street, west of 20th Street, date from the first years after the Civil War, but are stamped with the hallmarks of pre war Rittenhouse design. Wars may be cultural watersheds — the change in taste is rarely instantaneous. Such is the case with the Delancey Street row, erected between 1865 and 1866, apparently by Charles, Joseph, and James McCrea.

As was so often the case in the construction of Philadelphia rows, such as these, considerable variety was obtained by varying the lot width, building depth and also plan, while unifying the group by common water table, facade details, and cornice height. The variety of solutions undoubtedly affected cost, and suggests that individual clients were already involved when construction began, and thus that the houses represent taste and expectation of the initial residents which included many of the most notable old Philadelphia families -- including Robert Coleman (#2010), of the Cornwall Furness; William Drayton (#2012), John Ashhurst (merchant), and James McCrea (physician; #2004).

The house at the corner (2000 Delancey St) is most imposing and sets the principal themes for the group. Pennsylvania marble with projecting water table forms the base, which is interrupted by pairs of segmentally arch basement windows on either side of a projecting marble stair. The articulation continues on the first floor, with a centered door, flanked on either side by two rectangular windows, with square cut, flush lintels and projecting marble sills, evenly spaced across the brick rising walls. The third and fourth floors continue the same pacing, creating thereby five vertical registers of openings. Above a wood cornice with paired brackets centered on the space between the windows serves as a vestigial capital, and emphasizes the continuity of classical values in the house.

The notions of conservative traditional, and therefore most Philadelphian design is emphasized by the entrances of these houses which are despite post ware date, remarkably like Federal doorways, based on Latrobe's designs circa 1800. Here a severe brick attached opening is lined with slightly recessed marble pins carrying an arch, with a central keystone. That, in turn precedes a paneled, wood door jamb, and a semicircular fanlight.

The remainder of the block shares the same materials -- marble watertable, pressed brick walls, doorway, and cornice -- but vary in width. Unlike the center hall, double house scheme at #2000-02 Delancey, #2004 and #2006 are side hall city houses, with two first floor windows to the left of the arched door, and three windows spaced across the third and fourth floors -- while #2008, #2010, #2012 and #2014 are slightly narrower versions of #2000-02 Delancey. For those houses, doors open into central halls, but with two windows to one side opening into parlors, and only one window on the other, opening into a small reception room. The upper windows are spaced in vertical register above the first floor opening and continue the slightly wider portions of wall between the door and single window, creating a syncopated rhythm -- a, a, a, b, across the facade, which is emphasized by the position of the brackets of the cornice above, which continue to be centered on the wall panel, rather than evenly spaced across the facade.

Various alterations, mansards, colonial dormers, and so on have been added at different dates. For example, Thalheimer and Weitz modified #2010 Delancey for Mrs. John C. Martin in 1940 -- with a Georgian Palladian window to the left of the door, and a leaded glass fan light, but, the group remains clearly intelligible and understandable. Fortunately #2000-02, the most important of the houses, is also the most complete, retaining the original 2/2 sash, paneled, interior shutters, cast iron basement window grates, and thereby represents the origins of the row.

Interiors vary predictably, based on plan area and convention -- but common detail from house to house indicates again the unity of construction. The entrance vestibule at #2000 Delancey is paved with marble, with a marble surbase, and molding with plain plaster walls without wainscotting. A dark wood frame repeats the motif of the entrance, with a pair of paneled, glazed doors, below a fanlighted tympanum, leading into the center hall. On either side, large doors with deep moldings open into a suite of rooms, presumably originally parlor and library on the left, and dining room and drawing room on the right. Old fashioned paneled doors with these narrow and one deeper panel again recall early 19th century fashion.

At #2000 Delancey the stair is at the end of the hall and is of the simplest mid-century sort, with a heavy, octagonal tapered newel and turned balusters supporting a continuous walnut balustrade. In other houses, for example #2016 and originally #2010, the stair took a different position, being located between the reception room and the rear room, perpendicular to the axis of the hallway, and providing thereby a view to the rear garden.

At #2000 or as at the other houses of the group, the principal detail is concentrated in the first floor parlors. These are typically conservative, with front fireplaces being of dark Pennsylvania marble, with pilasters supporting a simple bowed center, flanked by corner blocks, while the rear mantles are given engaging Ionic columns carrying a flat entablature.

In others of the group, particularly #2010, interior finishes have been replaced by pieces collected from England and represent a typical upgrading of Rittenhouse mansions.

The block of 2000-2018 Delancey Street reflects the development of the Rittenhouse Square area as the home of Philadelphia's aristocracy because its architectural character represents the values of the gentry. The 2000 block of Delancey Street is the embodiment of these unchanging verities. Here, red brick and white marble trim, which has been the regional palette for a century and more, attain their normative and ageless Philadelphia form in an important and largely complete streetscape. Siting, style, and the persistence of taste have combined to preserve the block, while attracting important residents, numbering among them Rudolf Serkin (1856-1963), Pianist (#2004); John Ashhurst (1866-1910), Merchant (#2000-02); rare book dealers and collectors Philip and Abraham Rosenbach (1925-1951) (#2006 and now, #2010 the Rosenbach Foundation); while Francis Garvon, descendant of the President of the Philadelphia and Reading Railroad, owned #2006 from 1900 to 1925. It has thus retained its social standing for nearly a century.

Not only has the block attracted important residents, it has maintained its essential architectural form for almost six generations. That in itself is a tribute to Philadelphia values which have tended to support continuity rather than change. In the course it differs from New York, Chicago and other cities which have valued conspicuous consumption over community, and it then suggests the ongoing impact of the city's Quaker heritage. That may in turn explain the long survival of brick with marble trim which had moved the Reverend William Henry Furness to comment at the AIA 1810 convocation about "the long night of the Quaker Style". But, despite the impact of his son, Frank Furness, the unified rows and regular style of these houses has had a greater success maintaining their fashionable image to the present.

Instead they have been modified and improved in the context of their changing ownership. This, Stewardson and Page altered #2004 for Gerhard family in 1920, while Cope and Stewardson altered #2006 for Francis Garvon in 1900. Albert Kelsey, partner of Paul Cret in the early part of the century, altered #2008 for the Colket family and Newman and Harris worked on #2014 for the Benson family. But despite this continuous chain of change, the results are still unified.

There are two additional significant points about the development and its neighboring buildings. [FIRST] This row is a survivor of the pre-Civil War process of raising capital. The patterns of sales suggests that the McCrea Brother, who had primarily been masons, joined with previously found clients to share the cost of construction, with the McCreas owning several of the buildings as their share, which they later sold. A similar process had developed at Portico Square, with John Savage and his construction crew owning most of the buildings.

[SECOND] The second point is, of course, the important architectural community that these buildings complete. The remainder of the south side is similar to the 2000-2018 group, though differing in detail. The buildings across the street have a greater range with brownstone trim and Second Empire detail, but again the continuity is essentially unbroken. Particularly noteworthy, however, is the important house for the Speiser family, which imaginatively interprets the regional style but with modern color and materials. The net result is an extremely important block, largely intact, that represents the essential qualities of the Rittenhouse community.