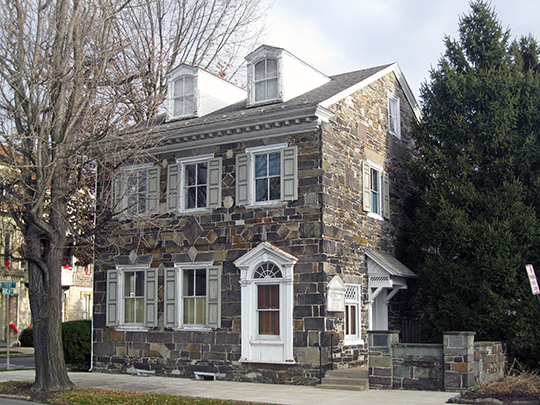 The Beck House (also known as the Old Scott House; 62 N. Front St.) was listed on the National Register of Historic Places in 1976. Portions of the content on this web page were adapted from a copy of the original nomination document. [1] The house is located within the boundaries of the Sunbury Historic District.

The original portion of the Beck House was built sometime between 1773 and 1796, probably by the first owner of the surrounding land, Jacob Doudel. The age of the front section of the house is confirmed by a 1796 datestone.

The original section of the house was of rough fieldstone, two bays by two bays, with large corner quoins. The sash windows had nine-over-six lights, and panelled shutters. Large brick chimneys were placed at either side of the building.

The 1796 section of the house is three bays on the front elevation and two stories high. Stones of geometric shapes — diamonds, circles, rectangles — have been inlaid as part of the stonework in several variations. A crude, raised string course between the first and second stories on the front of the building contains diamonds alternating with rectangles. On the gable end, large rectangles, a diamond, and a circle make a vertical pattern through the center of the building. The new section also has corner quoins. Its sash windows have two-over-two panes, with keystone patterned lintel over windows on both stories. A fine wooden cornice consists of dentils, moulding, and fretwork pattern. The mouldings continue across the gable end as part of a pent roof. The lower right hand window was originally an entranceway. It is flanked by pilasters and topped by a fanlight window. Above the window is a gabled hood of moulding with returns. The pilaster and moulding motifs are repeated on the two gabled dormers.

Exterior alterations have included removal of the shutters, addition of an enclosed porch on the north side, and addition of a patio on the south side.

A large proportion of the interior has remained unchanged from the original appearance. In the kitchen, a large fireplace is still in use. Panelled and plank floors with strap hinges, old fireplaces, and original plank floors remain in most rooms.

The Beck House is significant as an example of vernacular adaptation of architectural style, and also because a great deal of its interior is still intact. The house is also one of the earliest dwellings in the Sunbury area and as such is an important artifact of the area's early history.

The builder of the house combined customary classical detailing with his own design elements to create an integrated whole. The geometric designs in the stonework are highly unusual, probably unique. Such detail is extremely remarkable, particularly since the medium is fieldstone. The classical elements — fanlight window, pilasters, cornice — blend well with the dressed stone to form a distinctive piece of vernacular architecture.

The interior is notable because it contains many original features which are still intact and in use. Flooring, interior woodwork, fireplaces, and stairways are examples.

Original deed and warrant. "Honorable Thomas Penn and John Penn, Esq., Proprietaries and Governors in Chief of the Province of Pennsylvania," to Jacob Doudel, March 25, 1773, Lot #57 in the city of Sunbury. In possession of the present owner.

All Succeeding deeds duly recorded at above courthouse.