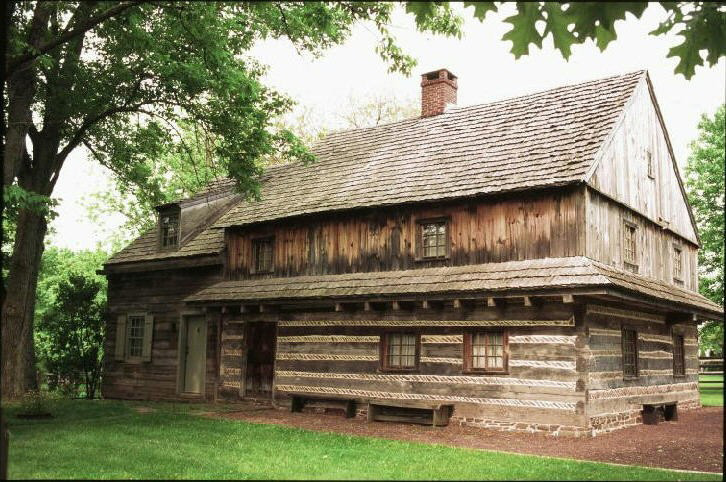 The Edward Morgan House [‡] was built circa 1700 near the settlement of Gwynedd. Despite the fact that the area was predominantly one of Welsh settlement, the house is essentially Germanic in plan and detail. The original 2 1/2 story, center chimney house was constructed of white oak logs, dressed with notched corners. The chinking between the logs consisted of stones set diagonally in mortar. The logs in the gable end were covered with vertical sheathing. The house is three bays wide and two deep. Window placement is asymmetrical. There is evidence that the original windows were of the casement type. Both the front and rear entrances are located off-center toward the north gable. A pent roof originally ran around three sides of the building. The steep pitched, gable roof was covered with hand split and side lapped shingles which were side tapered and butt nailed. A small, two bay, one-and-a-half story addition was made to the gable end at a later date.

Much of the original interior of the Morgan house is still preserved. The floor framing consists of exposed joists with the underside of the exposed floorboards double-reeded and finished. The same double-reeded joint is also used on surviving board partitions and doors. Many of the original doors, stairs, and stair rails are also intact as is most of the original hand-wrought hardware. The large cooking fireplace is completely intact even to the jigged brackets under the shelf.

At present (1973), the house is in rather run-down state. Original windows have been long removed as has the pent roof. The main section of the house has been covered with slate siding. The roof of the small addition has been raised to a full 2 1/2 stories. A full-length porch now runs across the front facade. Nevertheless, the house still maintains its basic, original appearance. Restoration of the house to its 1700 appearance is currently underway.

The Edward Morgan House is an excellent example of a medieval European log house. Many features, such as the basic center chimney plan, asymmetrical window and door placement, pent roof, diagonal chinking, and casement windows, give evidence of the medieval influence in building techniques. The house is remarkably well-preserved and has exceptionally fine interiors for such an early, rural dwelling.

Edward Morgan came to Pennsylvania in 1698 with a large group of Welsh settlers. He settled north of the main Welsh center at Gwynedd, where he quickly built up a prosperous farm. In 1720, his daughter Sarah married Squire Boone. Ten years later, the Boones moved to the Manatawny Valley in Berks County. It was there that Daniel Boone, the famous frontiersman, was born in 1734.