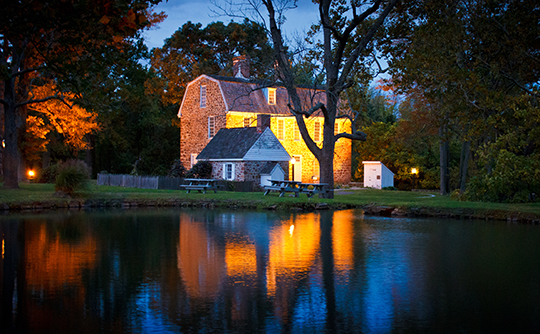 Graeme Park (also known as the Keith House) is a National Historic Landmark, listed on the National Register of Historic Places in 1977.

Graeme Park, plain in design, contains two-and-a-half stories, with a high gambrel roof. The structure is approximately 60 by 25 feet in size with walls two feet thick, of brown fieldstone carefully laid and fitted. Windows and doors are tall and narrow, in plain frames which accentuate the austerity of the exterior design. The building was used as a malt house and this accounts for the fact that its exterior is utterly devoid of ornament. The plain flat-transomed entrance portal is also placed off center in the north facade. The first floor doors and windows are topped by stone flattened arches. The high gambrel roof betrays the long persistent influence of the Swedish colonial tradition in Pennsylvania.

In contrast to the austere exterior, the rich paneling, installed in 1739, is of a high degree of Georgian sophistication. One enters the front (south) facade to a large square central hall with a fireplace, lighted by the one window to the left of the door. Back of this a small stairhall contains a deep staircase of almost 17th century aspect, with square solid newel posts, simply turned balusters, and a closed string. To the east is a large drawing room, over 20 feet square. The chimney and opposite wall are fully paneled from floor to ceiling with a simple sheathed dado and molded chair rail. A full cornice with a Greek fret band surrounds the entire room. The white plastered ceiling is 14 feet high and the deep window embrasures have interior paneled shutters. The fireplace on the west wall is the focal point of the room with the single-panel over-mantel surmounted by an eared architrave topped by a dentiled, broken pediment. Two flanking doors, one false, are surmounted by pediments over eared door frames. Similar framing is used at the windows.

The fireplace wall of the second floor parlor has a similar composition, but with no mantel shelf. Flanking cupboards are topped by semi-circular arched lunettes rather than pediments, and delft tiles, rather than local marble, surround the fireplace. Several of the upstairs fireplaces are faced with reproductions of delft tile, copied from three original tiles found in the house.

The second floor consists of three rooms, similar to the first floor in plan, although with lower ceilings. The half-story third floor contains one large finished room and three smaller unfinished ones. The kitchen and service quarters at Graeme Park were in detached buildings, now disappeared. The state has begun restoration of the outbuildings and keeps a scale model on display which is reproduced in a photograph. The pond, barn-yard, barn, old kitchen, privy, main house, and park creek, are existing. The kitchen and privy are reconstructions. The carriage road, cow shed, smoke house, Long or slaves house, poultry house, and carriage turnaround, are under excavation.

The boundary of Graeme Park includes all the land currently owned by the state and a large open tract to the west, both of which are part of the original land associated with the estate, beginning at the point of intersection of County Line and Keith Valley Road at the northwest corner of the property, then continuing in a southwesterly direction along the east edge of Keith Valley Road until it intersects with Governor Road, then southeast along the north edge of Governor Road until it ends at an unnamed road just to the south of the pipeline marked on the U.S.G.S. map, then northeast along the west edge of this road, continuing in a straight line to County Line Road, then west along the south edge of County Line Road to the point of beginning. All archeology work and findings are part of the designated landmark. The later farm buildings to the southwest do not contribute to the significance of the property.

Graeme Park, built in 1721-22 as a malt house and remodeled into a dwelling in 1739-40, is a distinguished example of an early colonial mansion with high Georgian interiors. The elegance of the woodwork is emphasized by the contrast with the exterior of random fieldstone and gambrel roof. Unoccupied since sometime in the mid-nineteenth century, the entire house remains virtually unchanged, with no modern alterations.

Although the original acreage has been reduced and none of the original outbuildings remain, with the exception of the barn, the area surrounding the house, with the stream and barn maintain the integrity of the environment. Both the house and land completely preserve the experience of an early country estate. Rural and rustic when compared to the Georgian mansions and cultivated gardens of town houses and those in the closer outlying areas, yet Graeme Park was designed and outfitted to provide all comforts of the sophisticated life of the American country aristocracy.

The buildings at Graeme Park were erected by Provincial Governor, William Keith in 1721-22. Called originally "Fountain Low", the estate was established for the production of alcoholic beverages. Three major buildings were erected between 1721-1726, a malt house, a long house or slave's quarters, and a barn. After Keith left office he went to "Fountain Low" to live, probably in the long house? In 1728 he returned to England, leaving his wife behind along with his daughter and son-in- law, Dr. and Mrs. Thomas Graeme. Dr. Graeme purchased the property in 1739, renaming it Graeme Park. He then began to convert the estate into a residence for summer entertainment, which would compliment his social position as a respected Philadelphia physician, surgeon at the Pennsylvania Hospital, and judge of the Supreme Court. Graeme died in 1772 and the property fell to his daughter, Elizabeth and to her husband. When it was discovered that no money remained, the house was offered for sale in 1773, but no buyer could be found, probably because of its great distance from the city. In 1778, Graeme Park was seized by the colonial government because of the loyalist activities of Elizabeth's husband. After the war the house was returned to Elizabeth, now deserted by her husband. In 1791, she finally sold the property to Dr. William Smith, her nephew. He divided the estate into lots and sold them separately. In 1801, Samuel Penrose purchased the tract with the house. It is not known how long anyone lived in the house. Around 1810, Penrose built a new dwelling and from that time there is no recorded evidence of occupation although archeological investigation indicates that the house was occupied sometime during the mid-nineteenth century.

In 1920, this land was acquired from Penrose's descendants by Mr. and Mrs. Welsh Strawbridge, who gave it to the Commonwealth of Pennsylvania in 1958. Currently undergoing archeological investigation and restoration, Graeme Park is operated as a state park.