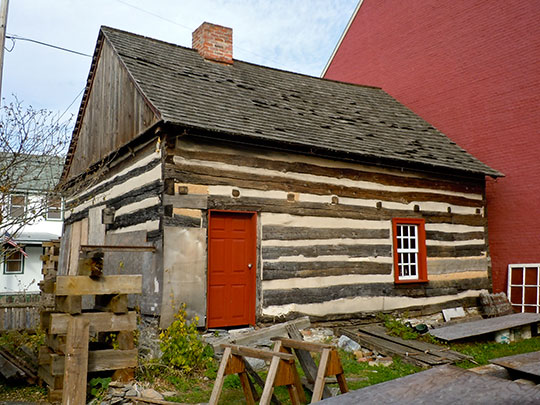 The Chestnut Street Log House was listed onto the National Register of Historic Places in 1976. Portions of the content of this web page were adpated from a copy of the original nomination document. [‡]

George Steitz received two warrants for land, one in 1737 and another in 1741, on which he laid out lots for a village. He began to sell these lots about 1750. His community was first known as Steitztown, but later became known as Lebanon. He was not the first settler in the area, as the land records prove, but his was the prudence that established Lebanon City. Accordingly, by 1772, there were 200 dwellings in the village.

The lots were sold by perches and amounted to two perches wide by six deep, a stipulation required that a house must be built upon the lot within 18 months of the purchase date. A second requirement mandated that each house have a stone or brick chimney. The earliest lots were located between 7th and 12th Streets on the east and west and the Quittapahilla Creek and Walnut Street north and south. The Chestnut Street log house is the only known house remaining that dates from the circa 1772 period.

It is within these confines that the Chestnut Street Log House is still standing. It is remarkable that it has survived with much of its original fabric remaining considering the fact that it was conceivably built while George Steitz was laying out his town.

A deed search has taken the house back into the 1820's but no record of a transaction has surfaced for an earlier period. However extensive research reveals that the house is an illustration of the design in "folk architecture" that has become identified with Early America. It is a prototype of the 18th century that has somehow survived.