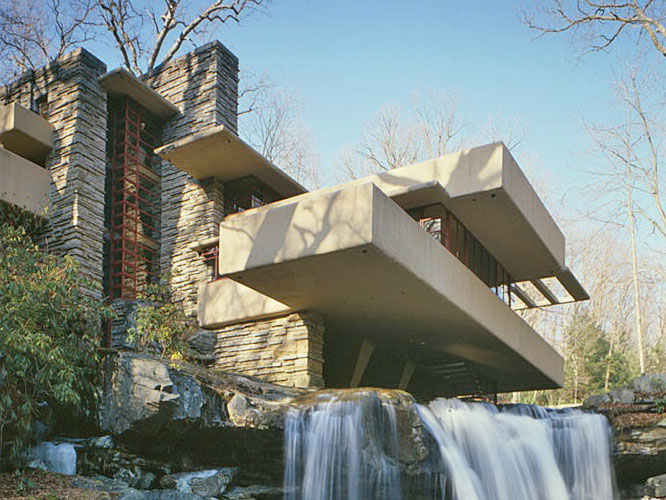 (Text, below, was adapted from a copy of the original National Historic Landmark nomination document.)

"Falling Water" is located on 500 acres of rolling woodland. The main house is sited on the north of Bear Run, above the upper waterfall.

The main house, built in 1936 and 1937, is three stories high. The first story comprises a large central living room, with dining table and glazed hatch leading down steps to the stream, the kitchen, and a small entry alcove. Steel and glass doors open from the living room to terraces on the east and west. The second story is occupied by a master bedroom and terrace (above the living room); Mr. Kaufman's dressing room (above the kitchen) opening onto a terrace to the west; and a guest bedroom (above the east side of the living room). The third story is taken by a bedroom (above Mr. Kaufman's dressing room), west balcony stairs leading down to the west terrace and a "gallery" opening onto a terrace above the center of the house. The bedroom is now furnished as a library, and the gallery – originally conceived as a connecting passage to a pedestrian bridge over the driveway – now leads to an alcove furnished as a small bedroom.

The structure of the main house consists of native sandstone retaining walls, piers, walls, and chimney core, with floors of cantilevered slabs of reinforced concrete. Window and door sash is of steel. Floors, indoors and out, are finished with 2" flags of native sandstone. Millwork is of black walnut plywood.

Wright designed all of the furniture that came with the house with minor exceptions. He used walnut veneer extensively on the interior furnishings, especially for cabinets and in the bedrooms. He chose other appropriate furnishings and sculpture for the house. Most of the furniture is of the build-in variety and thus stationary. The furniture serves the purpose of complementing the room rather than filling the space of the room.

Edgar Kaufman, Jr. described the structure in an article thus:

"Wright fixed the great chimney mass on top of a large boulder, its natural upper surface becoming the living room hearth, set above the finished floor. Around this point Wright swung his spaces: to the south the living room cantilevering over the falls; to the east the entrance spaces, to the west the kitchen, and to the north narrow strip for stairs and dining, all organized by four massive low piers that define the center bay of the living room. The north side of the house is almost sheltered by a steep cliff; the driveway runs narrowly between cliff and house. The structure is so unusual that, although it is accurately expressed, more familiar preconceptions lead most people to 'read' the house wrongly. They think of tall stone walls from which the reinforced concrete projects. In fact, Wright conceived the house as a series of horizontal concrete trays upturned, stiffening edges; these trays are merely spaced one above the other by short stone masses. Wherever stone and concrete meet, the latter is continuous. Each concrete tray is structural on its lower surface; above this, in many areas, is an air space divided by small concrete walls that support a wood floor, finished in flag stones from the nearby quarry...Wright kept talking about the continuity of all surfaces on either side of the glass line. Floors must be at the same level, in the same stone flagging; ceiling surfaces were to be continuous and their color, uninterrupted."

The guest wing and servants' quarters, built in 1939 on the hill above the main house, at about 1340' above sea level, is connected to the main house by a semi-circular walkway of stone protected by a cantilevered canopy of reinforced concrete. The guest wing is composed of a bedroom and lounge, with swimming pool to the east; the servants' quarters consist of two single rooms and one "double" sized room on the second story, above the four-place carport, and a chauffeur's room at the south end of the carport level. Structure and millwork are of same character as main house.

There have been few changes. In 1946 the kitchen was extended to the west to provide a servants' sitting room. At the same time, a separate furnace was installed for the guest wing. In 1954 the east part of the cantilevered roof slab above the guest bedroom terrace of the main house was rebuilt. After a flood in 1956 the hanging stairs to the stream were rebuilt with two additional steel ties into the bedrock of the stream. Incandescent lighting was changed to fluorescent lighting by the original occupants of the house in 1938 and 1939.

"Falling Water" on Bear Run is a summer house built for Pittsburgh millionaire Edgar Kaufman, Sr. Wayne Andrews has called it the "most famous modern house in the world" while Vincent Scully proclaimed it "one of the complete masterpieces of twentieth-century art." The house, cantilevered over a waterfall, has come to be one of America's most renowned buildings, appealing not only to architects, but to the general public as well.

Kaufman, a Pittsburgh department store owner, gave Wright the commission for a dream house retreat – a beautiful home, elevated over a waterfall, resembling a soaring bird or plane, its wings reaching out into the air, at once part of the natural landscape but also separate from it. Its relationship to its surroundings is like that of a nest in a tree, a made thing that is utterly natural. Wright himself writing in Architectural Forum (1938) stated that this house "has no limitations as to form." "Falling Water" is almost impossible to describe and very difficult to photograph – the site is spectacular, the house changes from different vantage points and the scale is elusive.

"Falling Water" exploits the site as few other structures have before or since – secured to a rocky plateau, the massive cantilevered balconies covered by a slab roof canopy float in the space over the swiftly moving stream. Equally beautiful when approached on ground level, the three stories of the main house combine visually with the massing of the guest house above to produce a sort of monumentality, even in its domesticity. Visitors are surprised by its comparatively few rooms – a massive living room, three bedrooms and service rooms all extended by balconies, terraces and canopy slabs that project off the house in all directions.

The interior spaces are as beautiful as the exterior. Wright did not believe, as have many architects before and since, that a house should be an empty stage for human action, capable of being changed at will. He set the stage and was also the director. Wright built in the furniture, used fluorescent lighting as an aesthetic element which mimics daylight or is used as indirect light when it is not needed as direct illumination for reading or at a desk. Structural materials are generally the same on both interior and exterior, the flag paved living room floor continues to a stair dropping to a plunge pool beneath the house. The windows at the corners hold glass sealed against glass so there is no visual interruption (they sometimes leak) and reveal the area Edgar Kaufman, Jr. describes as combining "the beauty of a mature forest, massive sandstone boulders, a wild, free-flowing stream, and a forest understory covered with native rhododendrons, laurel, and typical Appalachian wildflowers."

"Falling Water" exemplifies Wright's own dicta –"Architecture is the triumph of human imagination over materials, methods, and men." The house enhances and then transcends the site and has become symbolic of man's struggle with nature and his final acceptance of a partnership with the environment.

The house was given to the Western Pennsylvania Conservancy by Edgar Kaufman, Jr. in October 1969. They maintain and interpret the house for visitors (by appointment).