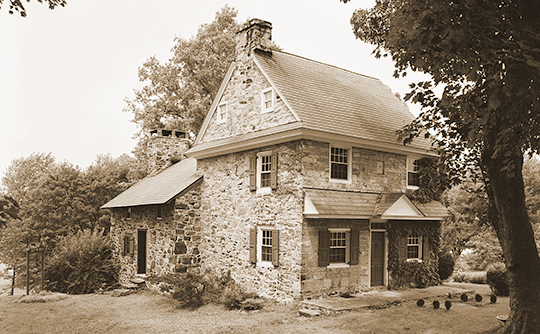 The Collins Mansion [1] was listed on the National Register in 1971.

The Collins Mansion (633 Goshen Road) is one of the earliest country residences in southeastern Pennsylvania—the area of original settlement in the Commonwealth. The house is also one of the first in the area to employ locally-quarried serpentine stone which later became a popular building material around West Chester. The house is also significant for the state of preservation in which it exists today. The house is substantially unchanged from its conditions after renovations in 1760.

Despite its rural location, the mansion exhibits many of the characteristics of Philadelphia town houses of the early period of the city. The sophistication of style demonstrated is notable considering its original rural setting.

The Collins Mansion is constructed in the tradition of Philadelphia city dwellings of the late seventeenth and early eighteenth centuries. Built in 1727 for Quakers Joseph and Mary Collins, the house features a facade of locally quarried and regularly dressed serpentine stone with side walls of fieldstone. The 1727 structure (measuring 23' x 21'6") is rather small but style is evident in the dressing of the stone facade and in the keystoning over the datestones among other characteristics. The Goshen Road was one of the main routes west from Philadelphia, but today the Collins Mansion sits well back from the placid country lane on a neatly landscaped three and one-half acre property.

Between 1758 and 1760, the mansion underwent extensive renovation (both interior and exterior) under the direction of Nathaniel Moore. The most significant change was the addition of a one and one-half story north wing of fieldstone (23'8" by 20'4") to house a kitchen. Other exterior changes included replacement of the 1727 windows (leaded glass above, oak casements below) with new sash windows in the same wide apertures. Two windows—one on each floor—were added to the west wall of the 1727 section at this time.