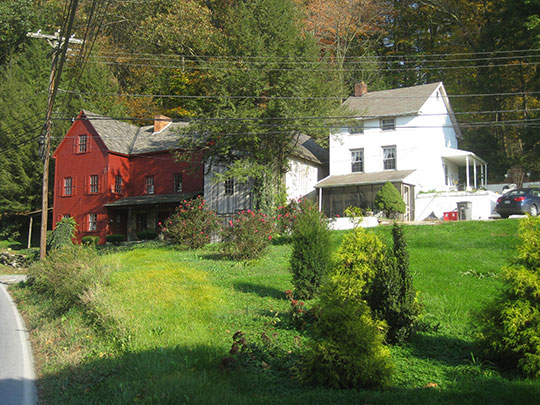 Embreeville was listed on the National Register of Historic Places in 1985. Portions of the content of this web page were adapted from a copy of the original nomination document.

The Embreeville Historic District is situated on the east and west banks of the West Branch Brandywine River in Newlin Township. Its 12 principal buildings are clustered in two groups and separated by the river which makes a dramatic bend here. Route 162 parallels the river and, like, it, twists and turns through the rolling countryside.

The topography in the Vicinity of Embreeville ranges from level flood plain to rather steep hills between 300 and 400 feet high. Many of the buildings are banked into the hillsides and look out over the river and the winding country road.

Architecturally, the buildings in the Embreeville Historic District lack conscious style. Most sit on the small lots they occupied in the 19th century and show minimal physical changes. The majority of buildings are stone and stuccoed and range from two to two-and-a-half stories. Plain gable roofs, plain cornices, and plain end chimneys are standard features.

The earliest building in the district appears to [have] thick stone walls and corner and large rectangular fireplaces; it dates from the mid-18th century. Portions of the mill also date from this period. A portion of the district known as "Old Embreeville" was built between c.1822-1842. The similarities (e.g., materials, height, proportions, orientation) among buildings in this area are striking.

From this period there is a farmhouse, a country store, a storekeeper house, a blacksmith's house, and a wheelwright's house and shop. These buildings show few exterior alterations and are generally in a good state of repair. About 1856, a "mansion" was erected across from the mill. With its two porticoes, broad symmetrical facade, upper row of half windows, and shallow gable roof, it referred to the Greek Revival style.

A modest wave of construction occurred in the 1870s-1880s. In 1879 Robert Smith built a small two-story banked house of frame for the miller. He also greatly enlarged the old stone mill with a frame addition. In "Old Embreeville," Lydia Mills had a large frame addition made to her house. Like earlier buildings, these late 19th century buildings are compatible with each other, neighboring properties, and their natural setting."

Although very small, the Embreeville Historic District consists of two parts: a milling complex on the west side of the West Branch Brandywine River and the village of "Old Embreeville" upstream on the east side of the river.

The milling complex, which features four principal buildings, originated in the 18th century. A 1756 deed mentions a "message, water, corn or grist mill and saw mill" here, located on about 6 acres. By 1769 there were two "messages or tenements" and over 100 acres of land. In 1771 James Trimble of West Bradford Township bought the mill and held it for 15 years.

The mill changed hands rather frequently through the 19th century. Several notices of sale provide an unusually clear picture of its growth and changes. In 1856 Thomas G. Smedley offered for sale the (by then) 146-acre property. It had: 1) a new stone house; 2) a stone tenant house; 3) a mill with 2 runs of burrs; 4) outbuildings, e. g., barn, wagon house, etc.; and 5) a saw mill. Smedley said the water power was enough to operate another mill—perhaps a paper or rolling mill—as well as the existing mill.

More details about the mill are provided in a notice of sale (this time from the Sheriff) dated 1860. The stone tenant, new stone house, and various outbuildings are described at length. The saw mill was stone and frame and measured 12 by 48 feet and contained an upright, a circular crosscut, and a circular ripping saw. The machinery, all "entirely new" was driven by a Howd's patent iron wheel. The grist mill was 3 stories stone and frame, used french burrs, had a corn breaker, smut machine, two bolting chests, and two elevators, and was driven by a pair of Tyler's patent iron wheels.

The mill and 29 acres were sold in 1876 to Robert G. Smith of Birmingham Township, Delaware County. Smith was probably attracted to the area because the Wilmington and Northern Railroad had laid its tracks in 1869 just north of the mill at Embreeville Station. There a new town, known as "New Embreeville," started to develop. Three houses, a store, two warehouses and a depot were built. In 1879 New Embreeville was called the North Ward and Old Embreeville, the South Ward.

Smith operated the mill for a number of years with apparent success. In 1879 he built a frame cottage for the miller. But in 1883-1885, Smith tore out all the old machinery and converted the mill to the "new patent roller process." The new machinery helped the mill continue into the 20th century. In 1966, it was hailed as the "sole surviving water-powered mill on the Brandywine."

While a great many changes were taking place in the 1880s in New Embreeville, very little was happening in Old Embreeville. A local newspaper noted in 1885, "There has not been a building of any kind erected in Old Embreeville for a number of years."

Old Embreeville was settled and developed within a relatively short time. In 1822 William Embree, who came from a family of French Huguenots, bought 2 contiguous tracts of land (about 61 1/2 acres) from the estate of Charles Wilson. Embree acquired an additional 13 acres in 1828. Like many members of his family, Embree was a brewer, maltster, and storekeeper. In 1835 he conveyed 3 acres (which contained the store and a house) to his son Norriss J. Embree.

The Embree family disposed of its holdings here in the 1840s. According to an 1842 notice of sale, the 78-acre property contained: 1) a farm (mansion, house, pump houses, milk house, barn, etc.); and 2) an adjoining village composed of several dwelling houses, a storehouse, malt-house, smith shop, wheelwright shop, tailor shop, and "necessary out buildings." In the notice of sale Embree apologized for the malt-house which he acknowledged was "rather old fashioned for the time," but added it "may, without much expense, be converted into dwellings."

The village which Embree and his family had built between 1822 and 1842 was sold off in small parcels, save for the farm which went to Joseph Pyle. It was sold to the Passmore family in 1856 and stayed a 64-acre farm until 1956.

The lot containing the store and storekeeper's house was sold in 1845 to Isaac Baily. Subsequently, it changed hands every few years. When Lydia Ann Mills, who had inherited the property in 1879, died in 1893, the store was described as a typical "country store" containing a loft, a cellar, and a shoemaker shop attached. The stock in the store at that time was "some 30 years old." A storekeeper's house went with the store in 1947, when they were split into two parcels. The stone core of this house was built before 1835. A large frame wing was added by Lydia Ann Mills in 1889.

In 1876 Isaac Baily sold off a small lot (35 perches) to John Cadwalader. By 1854, when Cadwalader sold it to James Conner, there was a house on the lot. The wheelwright shop and dwelling were sold on a 32-perch lot in 1842 to Johnson Patterson. The blacksmith property was split off from the Pyle farm in 1845. By 1858 there were 2 houses, stables, a smith shop, and a slaughter house. The property now contains just one building, the blacksmith's house).

After the fundamental changes of the 1840s, the village of Embreeville went quietly about its business for the next century. The Wilmington and Northern Railroad bypassed it in 1869 and gave rise instead to "New Embreeville," about a mile downstream. Currently, most of the village is, as it was in 1822, under a single family's ownership. In a sense Embreeville has come full circle with only minor physical changes. More than 150 years have passed since a village sprouted near an 18th-century mill seat on the West Branch Brandywine River. The modest homes of locally quarried stone and locally sawn wood are perched on the hills which rise rather abruptly from the powerful river below. Neither time, nor floods, nor the aftermath of the Industrial Revolution, have diminished Embreeville's ability to convey a clear sense of the past, when the Brandywine corridor—with its mills, small villages, and farms—was the focus of a regional identity.