Photo: Barn and Farmhouse in the Glen Rose Historic District, East Fallowfield, Chester County, PA. The Historic District was listed on the National Register of Historic Places in 1985. Photographed by User:Smallbones (own work), 2011, [cc-by-1.0 (creativecommons.org/publicdomain/zero/1.0/deed.en)], via Wikimedia Commons, accessed September, 2016. 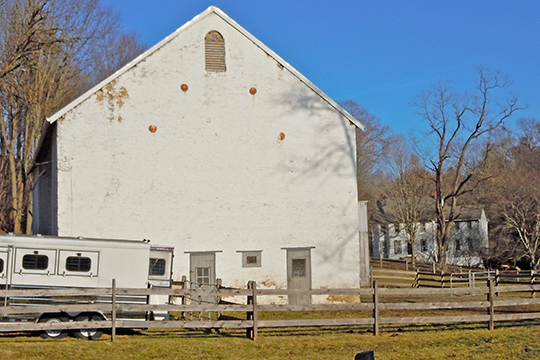 The Glen Rose Historic District was listed on the National Register of Historic Places in 1985. Portions of the content of this web page were adapted from a copy of the original nomination document [1]

The village of Glen Rose is a late eighteenth and early nineteenth century agrarian commercial crossroads in a principally agrarian township. The economic significance of any agricultural area depends on the ability of raw agricultural products to be processed and prepared for distribution to markets outside the production area. Therefore, the importance of the local milling center, is paramount to the economy and productivity of an entire region. The availability of natural water power at Glen Rose from the Buck Run resulted in development of milling facilities and the continued local importance of this crossroads community. Architecturally Glen Rose, like the rest of East Fallowfield Township, is vernacular in character and developed using popular style characteristics, but with its main emphasis on utility. Glen Rose is, however, a well preserved, cohesive and intact example of the vernacular rural village of the second period of the township's development (1761-1810).

Agriculture has dominated the land usage and economy of East Fallowfield Township since its inception. Several distinct periods can be identified in the development of the township and the sophistication of agricultural and marketing practices. These include: First period 1681-1760; Second period 1761-1810; Third period 1811-1865; Fourth period 1866-1910; after 1911.

The village of Glen Rose, though begun during the first period, saw its greatest development during the second, 1761-1810. The Thomas Truman Grist Mill (circa l775) and the George Passmore Cobbler Shop (circa l805), extant today, were built during this period. A saw mill, no longer present, also contributed to the economy and function of the village at this time. Mill ownership changed hands several times during its history.

When Thomas Truman of Sadsbury Township died in 1788 he left to his son William his tracts in the Fallowfields "with mills and dwellings thereon." The property taxed to John Wentz in 1791 contained a grist mill (Thomas Truman Grist Mill) and a saw mill. By 1808 the property had been conveyed to George Passmore who was taxed for a house (George Passmore House) two tenements, a merchant mill, saw mill and a small log tenement which was converted to a cobbler shop (George Passmore Cobbler Shop).

The next period, 1811-1865, saw further expansion by the addition of a clover/cider mill. This was the result of another ownership change. James Newlin purchased the property in 1835 and operated and enlarged the complex until his death in 1878, at which time the area consisted of a grist mill, saw mill, clover and cider mill (George Passmore Cider Mill), mansion (James Newlin House) and three tenements (James Newlin Tenant House).

The fourth period of development in the township, 1866-1910, saw the shift of marketing routes from small, separate shipping operations along numerous township roads to one main conduit for goods along the Strasburg Road. Glen Rose, however, because of its location in the remote southwestern section of the township remained somewhat isolated from exploitation of the Strasburg Road. This separation and the resulting development surge caused by the Road essentially passed Glen Rose by. A brief resurgence during the fourth period influenced by the establishment of the White Clay and Doe Run Railroad, just west of the village, did affect the village. In this nomination the James Newlin Tenant House has been included as a contributive component to the commercial development of the Glen Rose District. During this period Joseph Brinton was the last of the prominent and successful entrepreneurs to own and operate this commercial district. As a result of this new transportation link a creamery and post office were added to the community; both structures are gone today. Some settlement expansion took place also, but is reflected today only in the circa 1920 chapel.

The village's isolation and the shift of economy and transportation to other areas of the township during the fourth period resulted in the eventual closing of Glen Rose mills. Because of the loss of some of these railroad-influenced buildings the character of the Glen Rose district today is most reflective of its height of importance during the 1761-1810 period.

David Brinton, a Quaker who on October 14, 1890, opened a post office in a grist mill adjoining Spring Hope Creamery, suggested the name of Spring Hope, but it was not accepted. The Post Office Department handed down the name of Timicula (pronounced Ti-mic'-u-la), but neither Brinton nor the boxholders knew how to pronounce it properly. After reading Romona, a novel by Helen Hunt Jackson, Mary Ward, a teacher at Westtown School, suggested the name of Glenrose that she found in the novel. The change in name from Timicula to Glenrose was made on June 27, 1912.