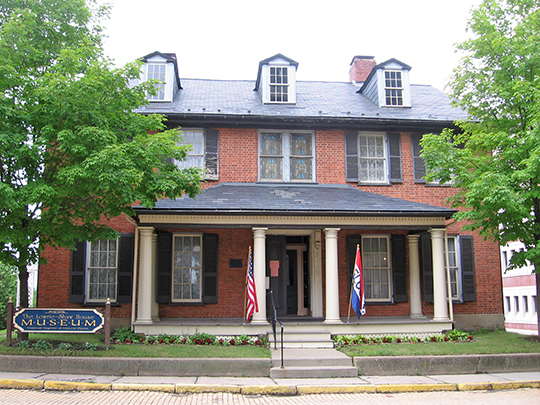 The Senator Walter Lowrie House was listed on the National Register of Historic Places in 1979. Portions of the content on this web page were adapted from a copy of the original nomination document. [1]

The Senator Walter Lowrie House is a two and one half story brick structure with a cut stone foundation and gable roof, measuring 48' x 38'. Three pedimented, gable roof dormers are located in the roof facing South Jackson Street. Windows in the dormers are six over six. The roof is covered with native black slate. Two interior brick chimneys are located centrally on the roof ridge. The cornices are plain boxed with returns. A two-story, shed roof wing extends from the rear of the house on the West Diamond Street side, and measures 21' x 25'. A large brick chimney is located in the center of the roof. The brick in the wing as well as in the main house is laid in common bond and was handmade on a brickyard in the local area about 1825.

The Senator Walter Lowrie House is five bays by four bays, the windows are six over six, double-hung sash with louvered shutters. The front facade has a one story hipped roof porch. Large rounded columns support the porch which is decorated with a wide cornice and dentils. It is probable that this porch was added circa 1870-80 when a new front door and the stained-glass window in the center second story bay was added. The front door has round-head glass panels and is topped by a four light transom and sidelights.

The West Diamond Street elevation has a door located between the first and second bay topped with a hood. Windows on the second story of the wing are 6 over 6 but of a smaller size.

The rear wing has a lattice covered porch facing the interior angle.

There are no auxiliary buildings associated with the house, however a large cut-stone wall supports the property against the West Diamond Street side.

This well preserved example of early western Pennsylvania vernacular architecture was built and occupied by Senator Walter Lowrie in 1828. Walter Lowrie served in the United States Senate from 1812 to 1818 and was Butler County's only United State Senator. In 1819 he was elected Secretary of the United States Senate, an office which he held until 1836. Following his term in the Senate, Senator Lowrie served for thirty-four years as Secretary of the National Board of Foreign Missions of the Presbyterian Church.