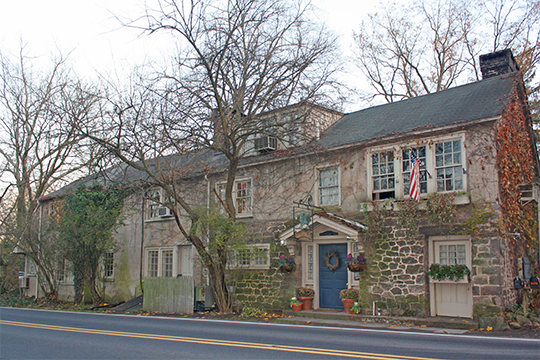 The Phillips Mill Historic District was listed on the National Register of Historic Places in 1983. Portions of the content of this web page were adapted from a copy of the original nomination document. [‡]

The Phillips Mill Historic District has significance for its early role as a milling village serving the farmers of the adjacent region, and for its later association with the well-known early 20th century artists William Lathrop, Daniel Garber and Edward Redfield, and its adaptation by them and their students. Further, it is important because of the Holmquist School, a very early example of John Dewey's progressive movement in education.

The mill village was established after 1743 at the time the land speculators were selling off parts of their large grants to the early settlers. A strong feeling of the period and function have been maintained and today it is probably the best preserved of all the mill villages which once existed in Bucks County. Early in the 20th century it became known as an artists' colony, influenced by the painter William Lathrop, his associates and students. The taste and style of the period continue today.

In 1756 Aaron Phillips bought a part interest in two parcels of land along the Delaware River with the water grist mill, water rights, miller's house and other buildings. By 1759 he owned the entire property. In 1791 he sold 105-3/4 acres and the mill, etc. to his son, Thomas. It continued to be owned and operated by members of the Phillips family until 1889.

For its day, the mill was a large one, abut 30' x 55'. It had an overshot wheel and turned three stones, one for flour, one for meal and one for cattle feed. The mill race, diverted from Primrose Creek, crossed the River Road through a sluiceway. In 1782 it had a tax value of 200 pounds, the highest figure among the four mills then in the township. It is unique, for it is the original building, not a restoration. It was never enlarged, it never had a turbine and it was never converted to steam.

It was customary for the local men to gather at the mill, visiting with the miller and other farmers while waiting for their grain to be ground. They generally paid for the service on shares, the farmer taking his part and the miller selling his portion for his own account. A review of some of the old ledgers reveals that while in 1848 and 1849 many customers were dealers and other businesses, others were local people; by 1889 there were fewer transactions, many of which were relatively small. Only one account can be actually identified as a regular business customer. One transaction appears to have been a sale to a commission merchant since a large number of barrels of flour were shipped by railroad to a firm at Front & Chestnut Streets, a part of Philadelphia which was the commission merchants' neighborhood. No price was entered for this transaction, and it is therefore assumed the shipment was on a consignment basis. There are several entries of custom grinding in the 1889 journal.

It was in that year, 1889, that Charles, the last of the four generations of the Phillips family to operate the mill, conveyed a little over 27 acres together with the grist mill, the mill race and water rights, etc., to Stephen Betts and his wife.

The mill was little used after Betts acquired it. About that time a Philadelphia physician, Dr. George M. Marshall, boarded his family with Mrs. Betts for several summers and in 1896 he purchased the entire mill complex and the 27 acres for his family's summer home. He influenced his boyhood friend, the painter William Lathrop, to come to Phillips Mill from New York and, in 1903, sold him the miller's house and 4 acres. The landscape artist Edward Redfield lived about one and a quarter miles away at Center Bridge and soon Lathrop's friend the American impressionist Daniel Garber, who taught at both the Pennsylvania Academy of the Fine Arts in Philadelphia and the Art Student League in New York City, bought a home two or three miles away on the Cuttalossa Creek. These three artists, who exhibited at the MacBeth Gallery in New York, were close colleagues of the artists (Henri, Glackens, Sloan, Luks, Lawson, Shinn, Davies and Prendergast) who comprised the famous group "The Eight," the American Impressionists. Their important paintings often depicted local scenes such as the Delaware River, the quarries, the canal, etc., and in particular the villages. They attracted other artists and well-known writers, actors, etc., who continued their careers in the area, forming the basis for the artists' colony.

One such was Morgan Colt whom Lathrop influenced to settle in the village in 1903. Trained at Columbia University as an architect, he abandoned his career in New York because his experiences with contractors were too frustrating. His artistic interests were wide, including painting and sculpture, wood carving, wrought iron and leather. He bought property from Lathrop and remodeled a substantial stone building, the former piggery, into a home and built a studio nearby. He converted his holdings to their present appearance of an old English village with an elaborate walled garden. It is perhaps the best preserved example of the Gothic/Tudor style of architecture, then in vogue, now remaining in Bucks County.

Dr. Marshall had kept the mill in operation as long as it was needed by any of the local farmers and then used it as a playhouse for his five children and their friends. The equipment was removed and is today displayed at the Mercer Museum in nearby Doylestown. In 1929 a group of local people purchased the building for a community center. Since then it has been used for the semi-annual art exhibits for which it is famed, also as a theatre, for lectures, folk and social dancing, etc. The appearance of the mill has not been changed and it remains today very much as it was in the 18th century.

The Holmquist School for Girls, one of the early progressive schools influenced by John Dewey's philosophy adopted by such institutions as the Dalton and the Walden Schools in New York and the Oak Lane Country Day School in suburban Philadelphia, has significance because it was started in 1917, long before the publication, in 1942, of the "Eight Year Study of Secondary Education" which changed our educational system and is the foundation of current teaching. One of the conclusions this study reached was "the creative energies of students were seldom realized and developed."

Miss Karline Holmquist, a friend of the Lathrops, came to Phillips Mill in 1910 to regain her health. She was a pianist of the old school trained in Paris and Berlin, and a skilled teacher who had been on the faculty of the Bennett School in New York. In 1917 she established her progressive school with six students and five teachers on the philosophy that the whole person should be educated. Recognizing the unique character of the artists colony in which she lived, she realized that her students, while being given a sound classical education, would benefit from instruction by the local artists and in this way develop their latent talents in music, painting, etc.

The school which soon outgrew the old barn where it was started, was moved to the Tudor style home of Dr. Marshall's sister within the historic district. Each day six classes were offered in the mornings, afternoons were for outdoor recreation and evenings were devoted to study. In lieu of formal report cards, personal letters detailing the progress of each girl were sent to her parents. With increased enrollment a broader and more structured program was adopted, and Miss Margaret Dewey, a Smith College graduate, was appointed academic dean. By 1931 the faculty numbered 19, large enough to continue the policy of adapting the school to the needs of each students. Courses, which included the five grades eight through twelve, were college preparatory, general, music and the fine arts as well as crafts. The school was on the Accredited List and most of the graduates went on to higher learning. Only some of the graduates, as was the custom then, sought careers after college. One former student was the noted anthropologist Margaret Mead. Unlike many other preparatory schools, it had no religious or other affiliations and its major source of funds was donations by private sponsors. It was greatly handicapped by a lack of endowments.

In 1925 the Solebury School, a progressive preparatory school for boys was established in the former residence of Dr. Marshall but was soon moved outside the district. It, too, was under-financed. The death of Karline Holmquist in 1943 and the resignation of Margaret Dewey in the same year, together with the devastating lack of funds, made it impossible to continue the Holmquist School after World War II and in 1949 the two schools were merged and now exist as the coeducational Solebury School.

There was also a little one room public school which was transferred to the Solebury Township School District by Charles Phillips in 1864 and continued to function until about 1918. In 1921 it was purchased by the Episcopal Diocese of Pennsylvania and is now St. Philip's Chapel. Of the thirteen one room school houses in Solebury Township, it is one of the two now in public use. It is in a high state of preservation (even the teacher's platform remains) and has become a local landmark.