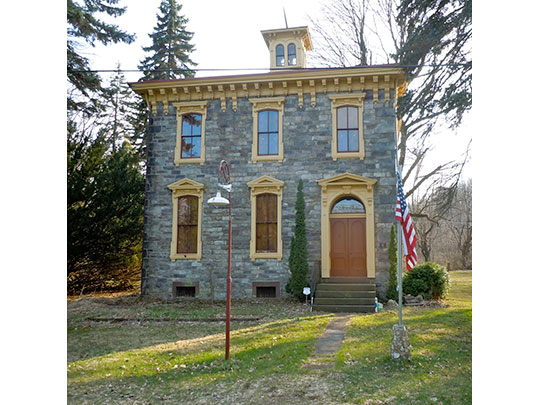 The Robesonia Furnace Historic District was listed on the National Register of Historic Places in 1991. Portions of the content on this web page were adapted from a copy of the original nomination document that was submitted to the National Park Service; prepared by, Diane B. Reed, Pennsylvania Historical and Museum Commission, Harrisburg.

The Robesonia Furnace Historic District is located in the southern section of Robesonia borough, along the banks of Furnace Creek. It is located in the broad valley formed by the Creek, with gently sloping hills to the east and west. Contributing resources are primarily the residential component of the iron plantation. They include both high style and sophisticated vernacular buildings, most dating to the early nineteenth century. In addition, no other ironmaking community in Pennsylvania contains such a variety of workers' housing, dating from 1800 to c. 1913-15. They encompass single worker's houses, including one and a half story single stone homes (c. 1825), bungalows (c. 1913-151) and duplexes Constructed of stone (c.1845), frame (c. 1890), and slag block (c. 1910). Also included are the archaeological remains of the industrial component, which was demolished in 1927. The district retains integrity, and is little affected by the few noncontributing residences added in the mid and late twentieth century.

Robesonia Furnace Historic District is ... a good example of the early establishment of the iron industry in eastern Pennsylvania. The first furnace on the site of Robesonia was established in 1794, and the iron industry persisted there into the twentieth century. An iron plantation, Robesonia is also significant in the area of community planning and development as representative of an ironmaking community which endured and evolved over a long period of time. ... No other ironmaking community in Pennsylvania incorporates the variety, integrity, and sophistication of the architectural resources of Robesonia. Robesonia contains several buildings of architectural note, including the Second Empire Taylor Mansion, the Italianate furnace office, and the Georgian ironmaster's mansion. Although many of the other buildings are vernacular, they are distinguished in incorporating unusually sophisticated millwork and detailing. ... Although the industrial component was demolished in 1927, foundations and retaining walls are still clearly visible, and have the potential for yielding information about the site by suggesting the size and configuration of lost buildings, as well as the overall layout of the complex. A significant number of artifacts, such as pigs and ladles are scattered at the site, and they may be a source of information about equipment used, and metallurgical advances made at Robesonia, and products of the company.

Robesonia Furnace began with the establishment of Reading Furnace at the same location in 1794 by George Ege, who also owned nearby Charming Forge. Ore for the furnace came from the Cornwall Mines twenty five miles distant in Lebanon County. In 1807 he built a Georgian mansion for himself near the furnace, as well as several log and stone tenant houses. After Ege's death in 1829 the property was run by a trustee, who subsequently offered the property for sale in 1836. At that time the property included 6-7000 acres of land, an ore right to the Cornwall Mines, as well as the mansion, a gristmill and a saw mill, and numerous other buildings.

After an assortment of proprietors, in 1845 the furnace was sold to Henry P. Robeson, who came from Manada Gap Furnace in Dauphin County. Robeson replaced the charcoal furnace with an anthracite furnace with a hot blast, capable of producing 50 tons of iron a week. In 1854, Robeson, Brooke, and Company built a new stack which yielded 240 tons of iron a week. In 1855, the Lebanon Valley Railroad was completed through what was to become Robesonia in 1859, greatly facilitating shipment of both raw materials and finished products.

In 1876 George Taylor became superintendent of the furnace. Taylor was interested in further increasing production. In 1884 they abandoned one stack and enlarged a second stack to increase its capacity to 1,000 tons of iron a week. At that time the firm decided to manufacture only one kind of pig iron, named "Robesonia", made exclusively of Cornwall ore.

In 1885 the furnace was sold to White and Co. of Philadelphia for $850,000, and became a stock company – The Robesonia Iron Co., Limited. W. C. Freeman of Lebanon became president of the company. However, George Taylor remained as superintendent until his death in 1903. Immediately a new and greatly improved furnace was erected, which remained in service until 1914. In 1912 the company, having accumulated a mountain of slag, used it to make cinder block. They built a number of buildings in the complex utilizing the block, including a fire house, several tenant houses, and a chemical laboratory. The houses and the fire house are still standing. Further improvements were made to the furnace in 1921 when automatic fill was instituted, and in 1924 when an automatic pig casting machine was erected, as well as a large electric gantry crane.

The increased productivity and efficiency of the furnace eventually led to its demise. When the furnace was established, it acquired a right to free ore from the Cornwall Ore Banks, 15 miles southwest, for a period of 130 years. Initially, this involved approximately 2,000 tons a year. With modern production, 100,000 tons a year were being taken from the mine for Robesonia. Although the original agreement only entitled them to ore for one furnace, by maintaining two furnaces, one always at the ready when the other was out of blast, the company ate up tremendous amounts of ore. Legal battles with the Cornwall proprietors resulted in the court establishing their right to supply one furnace, but would not allow them to utilize the other furnace when the primary furnace was not in service.

When Bethlehem Steel acquired the mines, they decided that to stem the drain on the mines their only choice was to acquire and dismantle Robesonia Furnace, which they proceeded to do on April 18, 1927. Subsequently the furnace complex was dismantled and the homes and other buildings were sold off individually.