City of The Dalles 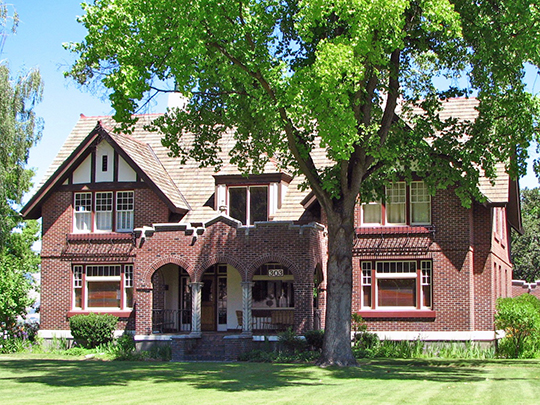 Dalles City was platted in 1855, encompassing the commercial core. The Dalles was settled as a result of exploration, influx of pioneers, and trade relating to the Columbia River and its tributaries. The term "The Dalles" came form the French word for long and short narrows between Celilo Falls and Big Eddy. (These no longer exist as a result of The Dalles Dam. When the town was settled the lots and streets were aligned toward the river. The town was incorporated in 1857 and by 1860 it had a population of 804. The Dalles is rich in history and has gone through several periods of boom and bust which were the result of economic as well as natural factors.

The first boom came in the 1860s with the discovery of gold in Idaho, Washington and Oregon. It was during this boom that Robert Pentland built the first flour mill in the downtown area in 1866. This boom lasted until the 1870s when the interior goldmines had been exhausted which led to economic hardship. In addition, The Dalles also suffered from several fires in 1871, 1878 and 1891 in which nearly all the original frame settlement structures were destroyed. However, as the town was rebuilt in brick and stone, the population increased to about 2,232 in 1880. The City also underwent a period of prosperity as a result of the railroad, wheat ranchers, stockmen and the fishwheels and salmon canneries. This period was followed by another fire in 1891 and the "big flood" of 1894 which inundated the entire business area up to 3rd Street.

As The Dalles entered the 1890s it became a center of trade and shipping, aided by the establishment of The Dalles Fruit Shipping Company. This period of prosperity continued and in 1903 The Dalles was considered the commercial center of Eastern Oregon. By 1910 The Dalles had reached a peak and continued to thrive with the fruit, wheat and fish industries, until the Depression in 1929. Today, The Dalles is a community with a rich history that is well supported by its built environment and people.