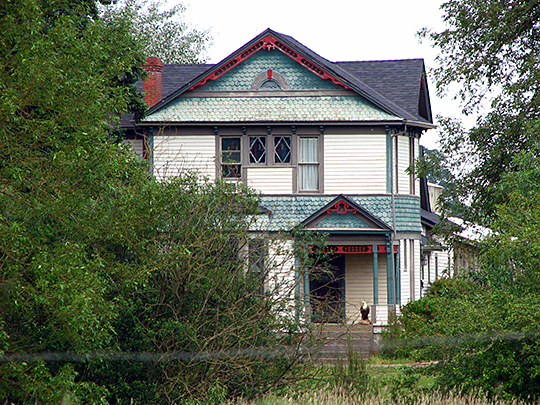 Aurora was the largest of four towns built in the American West by a communal society founded by Dr. William Keil. Keil was born in Prussia in 1812. He and his wife immigrated to New York where they established a successful tailoring shop. Keil had learned the trade in Germany. While in New York, Keil became interested in Christian Reform movements and developed his own interpretation of the New Testament. With only a limited knowledge of English, Keil found it necessary to sell his shop and travel to Pennsylvania where there was a large population of German-speaking people While preaching near Pittsburgh, Keil became acquainted with Andrew and Barbara Giesy and their 15 children. Four of the Giesy sons, Andrew Jr., Christian, Samuel and Henry, became students of Keil's teachings and helped spread the "word" in the Pittsburgh area. By 1844 there was a substantial number of Keil followers, including some former members of the Harmony Colony in Economy, Pennsylvania. Partially because of persecution and the need to be isolated from other basic teachings of the Christian religion, the decision was made to move west. People of all religious backgrounds were accepted into the colony as long as they believed in the basic principle of "love thy neighbor" taught by Keil. Shelby County, Missouri, was the location for Bethel, the first town founded by the communist group. Later, Nineveh was founded about sixty miles from Bethel. The two settlements were comprised of colonists from not only Pennsylvania, but also the Old Northwest, the South, and some directly from Germany.