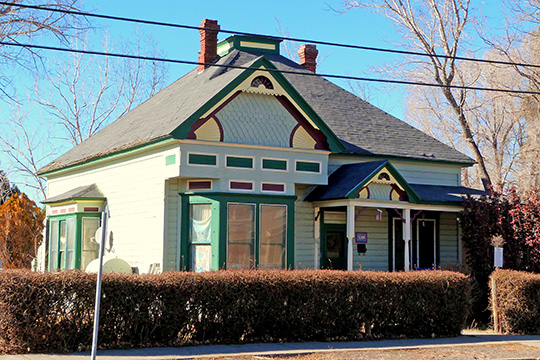 Lakeview, seat of Lake County, headquarters of the Fremont National Forest and site of a government land office, was established in 1876 on the site of the old Bullard Cattle Ranch. It was for many years a "cow town," and while still a trading center for a large cattle and sheep industry, it now has a box factory, five saw mills, planing mills and other wood-working plants. This attractive city is four miles from the northern end of Goose Lake, on a level plain.

Before any white men were known to have penetrated the Goose Lake country the Hudson's Bay Company had assembled such complete data from unknown sources that Colonel J. J. Albert, topographical engineer, was able to prepare a reasonably accurate map of the section in 1838, five years before Captain John C. Fremont made his journey of exploration.

When the southern migrant route leading from the Oregon Trail was opened in the middle 1840s, the wagon trains were so ravaged by Indians that in 1849 troops under Colonel William H. Warner were sent to subdue them. The command was ambushed and Colonel Warner killed. In spite of continued efforts of troops, the country was so dangerous that for many years no settler ventured into it.

After the Indians were sent to the reservation in 1871, the region became a vast cattle range, which joined the equally vast grazing area of central Oregon. Then came the range wars between the cattlemen and sheep raisers. No one will ever know how many men were assassinated and how many sheep were slaughtered before the government ended the strife by establishing the Fremont Forest and opening the disputed grazing lands to homesteaders.

The early government land office was the scene of many stirring episodes connected with the opening of the public domain, such as T.M. Overfelt's sensational horseback ride from the Silvies River to Lakeview, to attend the government land sale of the valuable Agency Ranch of which he and his partner, Henry Miller, did not learn until the last moment. By relaying from ranch to ranch, he covered the distance of nearly 200 miles in less than 24 hours, arriving in time to outbid his two competitors, only to have his check refused, though it was later honored by the government.

In 1900 Lakeview was destroyed by fire, only the courthouse and the Methodist church surviving the flames. The town was soon rebuilt with brick business blocks, water, and electric systems.

Because of his affection for the town, Dr. Bernard Daly, pioneer physician who died in 1920, formed a trust fund of his great fortune, which was to be used to educate "all the worthy children" of Lake County. For a number of years all children of the county were educated, but the demand on the foundation became so great that in 1928 the trustees were compelled to limit the number.

Lakeview's annual Rodeo, in September, draws spectators and participants from a wide area.