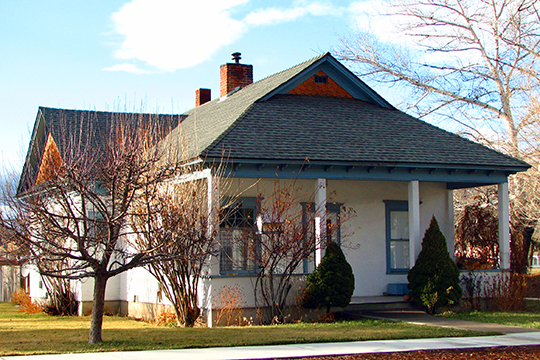 The first white man in the area was Peter Skene Ogden, a trader for the Hudson Bay Company. On his second Snake River journey from Fort Nez Perce (Walla Walla) between November, 1825, and July, 1826, he crossed the Deschutes River near the mouth. From the present site of The Dalles, he followed a route west of Tygh Ridge and crossed the Warm Springs and Deschutes Rivers again to arrive at the present site of Madras. From there he followed the Crooked River and made his way back to the Snake River. In 1843, John C. Fremont, guided by Kit Carson, crossed the Warm Springs area on his way to Nevada. Due to Indian trouble, settlement of the area did not follow very fast. In fact, settlement was discouraged officially. On August 7, 1856, General John E. Wool, Commander of the Department of the Pacific of the U.S. Army, issued an order to Colonel George Wright at The Dalles forbidding immigrants to locate east of the Cascades. The Cascade Mountain Range was considered a wall of separation between the Indians and the Whites. This order was revoked by General Harney on October 31, 1858. In 1862, the first road was built across the Cascades in order to provide a passageway for traders who wanted to supply the towns in Eastern Oregon, where mining was under way. As a result of these roads, White settlers began to move into what is now Jefferson County.

In 1855, treaties were drawn up with bands of the Wasco and Walla Walla Indians, creating the Warm Springs Indian Reservation. In addition to the Wasco and Walla Walla Indians, a number of Paiutes arrested during the military campaign against them between 1865 and 1868 were also settled on this reservation. White settlers soon began to fill every available site with homes and farms. Shortly after 1900, the construction of two railroads began between the Columbia River and Madras. The two lines were on opposite sides of the Deschutes River, and the crews had constant feuds and many bloody battles. Finally, the Deschutes line, backed by E.H. Harriman, was abandoned. The Oregon Trunk Railroad, built by James J. Hill, is still in operation. Arrival of the railroad in Madras was observed in Madras in ceremonies held February 15, 1911. At about this time, the first irrigation project was started.