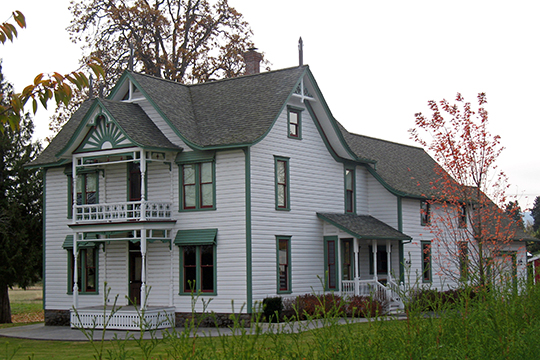 Hood River, seat of Hood River County and business center for a noted fruit-growing region, rises on the steep terraces of the Columbia River between the narrow and precipitous Hood River and Indian Creek gorges. The business district occupies the lower levels, and long flights of weather-beaten stairs climb the cliffs on First and Eugene Streets, connecting the market places with homes clinging to the sheer wall and resting on the heights above. At almost every point the broad river below and Mount Adams, with its flanking ranges on the Washington side, are visible.

From the lower part of town, Mount Hood, 26 miles south, is not visible, but from the heights it is seen in full grandeur, its massive bulk seeming almost at the door. Between the city and the mountain, the orchards of the Hood River Valley stretch almost unbroken, a mass of pinkish-white blossoms in spring, a sea of ruddy fruit in late summer and fall. The panorama is best viewed from the top of the Washington hills across the Columbia River — first the wide stream, then the compact group of business houses on the south shore, then the residences atop the cliff, and, finally, the orchards blending into the base of Mount Hood.

Throngs of visitors come to the city and its environs, especially in summer, and make it their headquarters while exploring the clear streams, green hills, and clean orchard land. When the harvest opens in late August there is an influx of fruit pickers; and trucks, filled with fresh fruit travel to warehouse and cannery, leaving behind the fragrant odor of ripened apples and pears.

Itinerant workers pour into Hood River at the opening of the fruit gathering season. Boys seeking adventure or the chance to earn a few dollars to help them through school, young women trying to get away from the humdrum of home, drift in and soon find a place in the busy crew of harvesters. Roaming families packed in old jalopies trundle up the steep streets toward the upper valley, following the fruit from crop to crop. Pinched little faces showing the lack of food peer from the torn curtains of cars; young bodies covered with ragged clothing huddle among tubs, washboards, and camping plunder. Groups of Hawaiian and Filipino boys, eager to please and learn American ways, labor industriously and make their evening camp a scene of pleasure with the ukuleles and lilting native songs.

When the strawberries ripen in June many Indians come into the valley from the Warm Springs Reservation to gather the fruit, and remain through the loganberry and raspberry season. For generations, Indian women have been adept at gathering olallies. While the men idle and smoke, the women and children toil in the sun, deftly harvesting the red berries. It is a common occurrence to see the Indian women with papooses strapped to their backs stooping along the rows. However, the Indians are not attracted to picking fruit that grows on trees; they leave the gathering of apples and pears to white people.

Indian tepees of the village of Waucoma (Place of the Cottonwoods) dotted the ground near the confluence of the Columbia and Hood Rivers when Lewis and Clark arrived in October, 1805, on their way to the Columbia's mouth. It was not until 1852 that W. C. Laughlin and Dr. Farnsworth discovered the abundant grass of the Hood River Valley and moved in with their herds. Winter storms of 1852-1853 destroyed their stock and so discouraged the men that they soon left. Nathanial Coe was the first permanent settler, arriving with his family in 1854. The spot then bore the unromantic name of Dog River, because the people of an early emigrant train, being delayed, were forced to subsist on dog meat. Mrs. Coe soon forced a change of nomenclature, refusing to accept mail for the community unless it bore the address of Hood River.

The Hood River Valley developed slowly before the Oregon Railroad and Navigation Company's line reached it in the early 1880s. Heavy timber and deep snow in the valley offered little inducement to homesteaders. Settlers were scattered and money was scarce. Income from cordwood peddled at The Dalles and accepted as legal tender, provided the principal income. But with the coming of transportation conditions changed. Sawmills were built in the heavily timbered valley, beginning an industry that is still important in the area.

Virgil Winchell, an old settler familiarly known as "Doc," often told of the hardships of his childhood. Roads to the "outside" did not exist. Provisions were sometimes brought in on pack ponies, but for the most part they were brought down the Columbia River from The Dalles by boat. One winter, storms began early, cutting off the valley from the outside world, and the settlers were caught without food staples. One day Mr. Winchell, then a small boy, discovered in his father's barn a great many native birds, mostly blue jays and owls that had taken refuge from the cold. He called his father, who immediately chinked all exits and began catching birds. The Winchell family still had a small quantity of flour, and that night at supper they feasted on blue jays and owl pie.

Arrival of the rail line, however, put an end to isolation and many hardships. Attracted by the region's recreational resources, Portland citizens built summer cabins, and in 1889 a group of Portland's capitalists constructed Cloud Cap Inn on the north snow line of Mount Hood and built a toll road to it. The Inn was the first mountain hostelry in the Pacific Northwest.

In the last decade of the nineteenth century, Hood River residents discovered the suitability of local conditions for fruit-raising on a large scale. The first cash crop was strawberries. Professor T. R. Coon, pioneer Oregon teacher, migrated to the Hood River Valley in the eighties, bringing with him a supply of Clark Seedling strawberry plants, which had been developed in the Mount Tabor district of Portland. In a few years the valley was producing Clark Seedling strawberries in car lots. Ranchers, who had been living in comfort but without cash surpluses, soon found themselves in comparative luxury. For years annual shipments have exceeded 300 carloads.

The first apple trees in Hood River were planted by the Coe family, and other pioneer families soon had productive home orchards, but natural barriers stood in the way of commercial development. The valley floor was so densely covered with giant conifers and oaks that clearing land was a slow and expensive process. To help in preparing the ground, land-owners brought in Japanese laborers. The industrious Orientals stayed by the job. They dug out stumps, cut slashing, burned debris, tilled the soil, and transformed cut-over waste into a vast garden.

The first carload of Hood River apples was shipped to New York City in 1900, and from this carload the apple industry in the Pacific Northwest had its real beginning. Rumors of the new industry spread rapidly, and soon there was an influx of settlers bent on becoming gentlemen farmers. Retired business men, navy and army officers, and young college graduates, created a sort of golden era of business and refinement unusual for so small a city. For years Hood River had a University Club with several hundred members, probably the smallest city in the United States to have such an organization.

The region's orchards approximate 10,000 acres, and while apples are still predominant, the acreage of pears has so increased that pear production bids fair to equal the apple output. Cherry culture has also been found profitable and hundreds of tons of Royal Annes, Bings, and Lamberts are produced annually. Anjou pears are shipped to the Sudan district of North Africa.

For several years Hood River was the home of Frederic Homer Balch, missionary preacher and Oregon's most important novelist. Here he wrote Genevieve, A Tale of Oregon, and most of The Bridge of the Gods, his best-known work. A resident in the city at various periods after 1913 was George W. Cronyn, who married a native of the valley, and has written, among other books, The Fool of Venus (1934), a historical novel of the troubadours, and Mermaid Tavern (1937), a fictionalized life of Christopher Marlowe, the Elizabethan dramatist. Anthony Euwer, poet, lecturer, and essayist, lived here for a number of years and Percy Manser, the landscape artist, makes his home nearby. The principal public event in the city is the annual Mount Hood climb sponsored by the city and the American Legion. In July of each year several hundred people from Hood River and other points in the Northwest gather at the legion camp at the foot of Cooper Spur on the east flank of the mountain and begin the steep ascent at dawn.