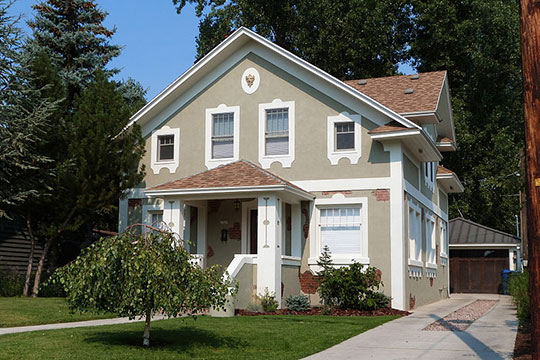 Bend was not a pioneer settlement in the sense of early establishment. The city's name is derived from "Farewell Bend" which was the only place for many miles where the Deschutes River could be easily forded. The high Pilot Butte was an excellent landmark. For a time, however, better routes diverted travel from the bend and it was forgotten, except by the few cattlemen who ranged their stock thereabouts. Then in 1900, A. M. Drake, an easterner who had come west in search of health, heard of its high altitude and dry climate. Accompanied by his wife he visited it, and Mrs. Drake became so enamored of its beauty they decided to remain.

Three or four years later, the Deschutes Irrigation and Power Company secured rights to 200,000 acres, which it put under irrigation. In 1904 the Pilot Butte Development Company platted the town and after 1909 growth became steady, when 300,000 acres of agricultural land were thrown open to entry under the homestead law. During the passing years timbermen filed on the great stand of pine on the nearby mountains, and wheat and lumber so attracted transportation interests that in 1911 the Oregon Trunk, subsidiary of the Great Northern, and the Deschutes Railroad, subsidiary of the Union Pacific, started a frenzied race to push their lines up the Deschutes River and on down into the Klamath Lake country.

Then timber became the source of fabulous wealth, as the flat cars began to roll along the newly-laid rails. Men whose names were prominent in the country's financial circles invested in Bend property. Tom Shevlin, noted Yale football player, came out in 1915 and built the Shevlin-Hixon sawmill, and the same year a start was made on the Brooks-Scanlon mill. With the coming of these industries, the original population of 21 persons (1900) increased to 536 by 1910, and ten years later, to 5,415. This was an increase of 910 percent, a record in the United States for the decade.

Bend is the center of an extensive recreational territory. More than 100 lakes and 300 miles of fishing streams lie within 50 miles of the city. There are swimming and boating on clear mountain lakes, horseback rides along forest trails, camping in primitive areas, golf on a mile-high course; there are lava cones, lava tunnels, lava forests; ice-caves and subterranean rivers; canyon depths and mountain heights.