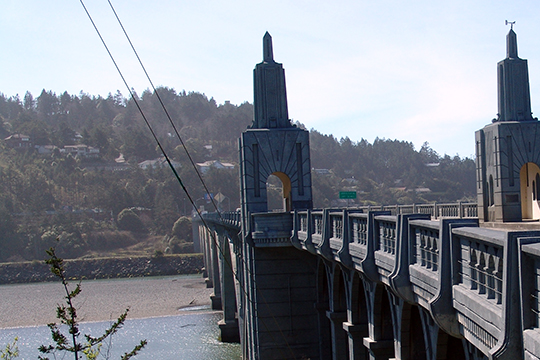 Gold Beach, seat of Curry County, was first called Ellensburg, then Sebastapol. Seat of the most primitive county in Oregon and long isolated by lack of roads, Gold Beach has only begun to shed its pioneer appearance. Orientals, Indians and white men made up the population in early days when gold was passed freely across the counter of the log-cabin saloon that was also the county's first courthouse. The town was so named because of the placer mining done in the 1850s at the mouth of the Rogue River. Floods of 1861 swept these beach deposits into the ocean, but small operations for gold and platinum are still carried on upstream and mining sometimes muddies the current to such an extent that its brown waters are seen far offshore.