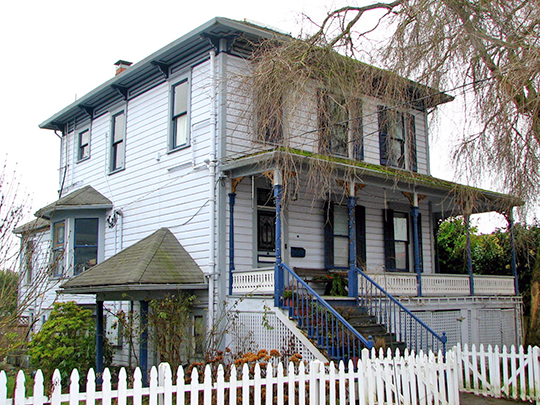 The promoter Henry Knighton, founded St. Helens in 1849-1850 and believed for a time that it would compete with Portland now the state's metropolis and major port,which is situated 30 miles upriver. The current population of St. Helens [in 1984] is 7,200. Though Knighton's initial dream was unrealized, his grandiose scheme is reflected in St. Helens' plat, laid out somewhat in imitation of Philadelphia, and in his house, the lumber for which was shipped to the site around Cape Horn. While not a successful competitor of Portland, the community gained an early lead among the surrounding towns in Columbia County which was solidified in 1854 when St. Helens was made the county seat. Reflected in the historic downtown district also is the fact that St. Helens experienced very gradual growth during the last half of the 19th century and suffered a severe setback when, a fire in September, 1904 destroyed the greater part of the business area and the major lumber mill in the town. In 1908, however, lumbermen Hamlin and Charles McCormick saw the potential of the town's strategic river location and proceeded to build the "big mill" and a number of other timber-related factories. As a result, the population of St. Helens exploded, the commercial core revived, and the surrounding residential area rapidly developed. Unfortunately, this boom era was cut short by the Great Depression. Having been by-passed by major railroad and highway routes, the St. Helens Downtown retains important elements of its early beginnings, and its boom era development is almost entirely intact, thus creating a character which is a blend of county seat and "payroll city."