Photo: Dr. Forbes Barclay House (ca. 1849), 719 Center Street, Oregon City, OR. Dr. Barclay built this house after retiring from 10 years as a physician with the Hudson's Bay Company at Fort Vancouver. In Oregon City, he continued medical practice as well as holding a variety of public offices. The house was moved from its original location to its present address in the 1930s. Listed on the National Register of Historic Places in 1974. Photographed by User:Werewombat (own work), 2008, [cc-by-3.0 (creativecommons.org/licenses/by/3.0)], via Wikimedia Commons, accessed January, 2014. 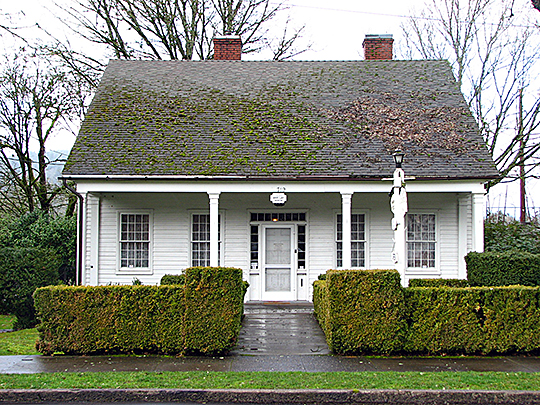 Oregon City is the seat of Clackamas County, situated at the point where the broad, navigable Willamette River drops forty-two feet from a basaltic ledge with a crest more than three thousand feet long. The city owes its importance as a manufacturing center chiefly to utilization of abundant water power furnished by the falls.

The city is best viewed from the west end of the graceful, single-span Willamette River bridge. As the prehistoric inland sea that filled the Willamette Valley gradually drained into the Pacific Ocean, it left three distinct terraces or shore lines, locally called benches, on the precipitous bluff along the east shore of the Willamette River. Occupying the first of these benches, between the river and the cliff, is the business section of the city. A hundred feet above, on the second terrace, is the residential district. Two hundred feet above this is the third bench, stretching eastward toward the green foothills of the Cascade Range and the rigidly symmetrical slopes of Mount Hood. Streets so steep that they seem to stand on end connect these three levels. Many houses edge the cliff, facing the wide expanse of river and forested hills beyond. Almost hidden in trees and shrubbery, they peer down like sentinels from a parapet.

The chinook salmon run in mid-spring, and the flocks of fishermen drawn to it, can be seen from the bridge. Above the span, in the pool below the falls, is a choice spot for more venturesome sportsmen; it is difficult to keep boats in place here, but the salmon rest in the pool before attempting the fish ladder over the falls. The great majority, however, fish below the bridge at a safe distance from the white torrent, their boats anchored in rows at right angles with the current. From the bridge, too, is a birds-eye view of Willamette Falls and the industrial plants huddled close on both sides of the river.

White occupancy of Oregon City, in an area that the Hudson's Bay Company did not originally want settled, was forced upon the company because of the pending boundary settlement between the United States and England. "It becomes an important object to acquire as ample an occupation of the Country and Trade as possible," company officials wrote in 1828, "on the South as well as on the North side of the Columbia River, looking always to the Northern side falling to our Share on a division, and to secure this, it may be as well to have something to give up on the South when the final arrangement comes to be made." Dr. John McLoughlin of Vancouver, chief factor of the Columbia department, was ordered to set up a sawmill at "the falls of the Wilhamet (south of the Columbia) where the same Establishment of people can attend to the Mill, watch the Fur&Salmon Trade, and take care of a Stock of Cattle."

Three log houses were built on the site of Oregon City in the winter of 1829-30, and potatoes were planted in the spring. The Indians, resenting this infringement of their territory, burned the houses. A flour mill and sawmill constructed in 1832 made use of the first water power in Oregon. Feeling quickly developed between American settlers and the Hudson's Bay Company, and in 1841 a group of Methodist missionaries organized a milling company, occupying an island below the falls, opposite the property claimed by Dr. McLoughlin; later they built on the shore, directly on his claim. In order to forestall this preemption, Dr. McLoughlin the' following year named the town and had it platted by Sidney Walter Moss, who came with the first big group of settlers in 1842 and owned a pocket compass.

The Oregon Temperance Society, founded in 1838, was the first of its kind in the region; prohibition, much agitated at the time, had a safety factor, for no house was safe from Indian entry if it was known to contain liquor. The Multnomah Circulating Library was organized in 1842, with three hundred books and a capital of $500. The Oregon Lyceum and the Falls Debating Society were formed the following year. The latter probably gave impetus to the beginning of civil government in the Northwest; its members frequently debated such questions as "Resolved, That it is expedient for the settlers on this coast to establish an independent government."

The immigration of 1844 added about eight hundred people to the population of Oregon City. The provisional government, formed the year before at Champoeg, chose the city as its seat, and the first provisional legislature assembled here in June, 1844. Jesse Applegate was given authority to replat the city, making it larger than the original Moss survey. He used a rope four rods long instead of the usual surveyor's chain, and the variation in the rope's length due to moisture conditions and stretching accounts for the irregular size of the lots. The legislature granted the town a charter, making it the first to be incorporated west of the Missouri River. George Abernethy, who one year later became provisional governor, erected the first brick store in Oregon. In the same year the first furniture factory in the Pacific Northwest was built here.

By 1846 Oregon City had seventy houses and some five hundred inhabitants. In that year the Oregon Spectator began publication, members of the Masonic fraternity organized the first lodge west of the Missouri River, and the first American flag owned by the provisional government was raised.

Oregon City was profoundly shocked by news of the Whitman massacre at Waiilatpu in 1847; the surviving women and children were brought to the town by Peter Skene Ogden, Hudson's Bay agent. The Oregon capital sent men to fight in the resulting Cayuse War, and the murderers of the Whitman party were subsequently tried in Oregon City, sentenced to death, and hanged. In January, 1848, Joe Meek, a colorful character, left Oregon City to carry the request of the provisional legislature for territorial status to Washington, and returned in March, 1849, with the newly appointed territorial governor, Joseph Lane. The city was made territorial capital and remained so until 1852, when the seat of government was removed to Salem.

Oregon City's modern industrial life dates from 1864, when a woolen mill was established by two brothers named Jacobs. Two years later, the erection of the first paper mill on the Coast initiated development of the city's most important industry. In 1925 Oregon City adopted the commission form of government and appointed a city manager.