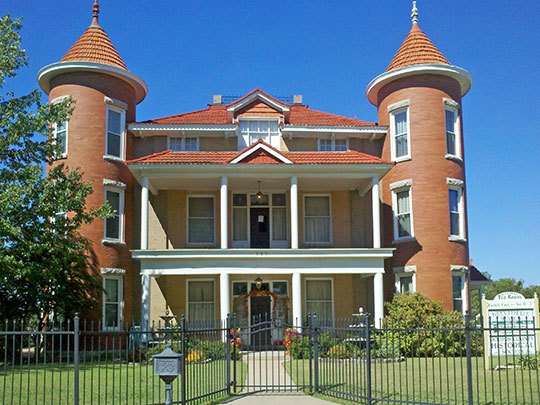 The first settlers in the Claremore area in historic times were Osage Indians who arrived early in the 1800s under the leadership of the chief for whom the town is named. Approximately ten years later, this corner of the then Indian Territory was transferred to the immigrating Cherokee Indians. Cherokee ranchers, including Clem Vann Rogers, future Principal Chief of the Cherokees and father of humorist Will Rogers, patronized a small trading center in the area from the 1850s until 1883, when the town of Claremore was platted and incorporated under Cherokee law. The presence of two railroad lines and a number of merchants, small manufacturing concerns, bankers, and professional men made it a town of some prominence by the end of the century. When a local oil prospector struck a peculiar type of water in 1903, it took Claremore citizens only a short while to realize they had a unique resource to exploit. Analysis of the dark, sediment-heavy water smelling of hydrogen sulphide revealed that it contained a number of minerals, allowing it to be marketed as "radium water," efficacious, it was said, for a wide variety of illnesses. Claremore's newest and largest industry was born: it became a health spa on the model of Hot Springs, Arkansas. In 1903 there were only three hotels in town; by 1907, the year the territory became the state of Oklahoma, there were five hotels with two bath houses. By 1911 "Radium Town" on the east side of Claremore boasted fourteen hotels, several combined with bath houses, at which guests stayed for extended periods to "take the waters." The number continued to grow, reaching a peak of about twenty in 1916. Claremore's farm and ranch service businesses, state-owned Oklahoma Military Academy, and status as the seat of Rogers County continued to take second place to the health resort industry as the town's major economic base through the 1920s, 1930s, and 1940s.