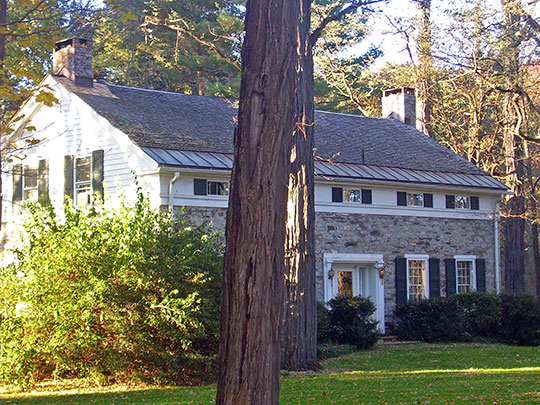 The Town of Rochester grew out of the original Dutch settlement community of Wildwyck on the Hudson. At that time, the extended colony had a strong agrarian character, with the initial inhabitation stretching along the fertile alluvial basin of the Rondout Creek. This pattern tended to disperse the population and, as a result, few true towns or population centers developed. Later, in the nineteenth century, as the industrial base of the township grew, this pattern continued with mill sites and small shops being located in the surrounding hills close to the streams that powered them and the natural resources that they used. Tourism, the third phase of development in the first third of the twentieth century, capitalized on the open nature of the township and the diverse natural attractions found in the mountains and valleys. Tourists were encouraged to visit the countryside and escape from the city environment. Today, this same openness of the land is responsible for a new enthusiasm and a rediscovery of the Town of Rochester for weekend vacation and year-round homes.

The first-known written description of the Rochester area comes through the journals of Captain-Lieutenant Cregier. Cregier, as the burgomaster of New Amsterdam, was placed in charge of the Esopus militia shortly after the massacre. During his six month tenure in this position he kept a daily log. Two translations of this important journal are available. Of particular interest is his description of the march into the then unknown territory of Rochester and Wawarsing townships. His written notes, as well as the first hand experience and verbal accounts of the men who accompanied him on the July 1663 expedition, must certainly have sparked later interest in the region. The group took two days to travel to the site of the old fort near Kerhonkson. They remained there a few days to raze the settlement and then returned home to Wildwyck in one day's march. In that brief time, many men must have had an opportunity to assess the potential of that new land.

The first settlement of Rochester is a speculative matter. But by the time the Rochester land patent was granted on June 25, 1703 (forty years after Cregier's march), there was already a solid contingent of established residents, numbering 334. In fact, numerous early deeds with the Indians were executed prior to the establishment of the patent. The issuing of a Town patent and a Town name was perhaps viewed as a matter of governing convenience, since both Marbletown and Rochester were well inhabited upon their establishment as townships. This act allowed for closer regulation and administration on a local level and recognition of a single name. The patent specifically says "...the said town of Mumbakkus [sic] from henceforth [shall be] called and known by the name of Rochester in the County of Ulster, and not otherwise."

The eighteenth century settlement was typified by the development of a highly successful commercial agrarian community. The legal formation of the Town in 1703 establishes a point in time when Rochester changed from a settlement to a recognized community. Area farmers became prosperous exporters of agricultural produce by working the rich Rondout Valley basin. To support this thriving group, small mills of all varieties were soon built on the nearby streams. Their primary link to the home settlement of Kingston and their export link to the Hudson was most often referred to as the Kings Road or Highway. This crucial artery followed the easy terrain of the Rondout and passed through the other farming hamlets of Stone Ridge, Marbletown, and Hurley on its way north to the river port.

The predominant residential architecture of the agrarian era was the one-story stone house. While a few houses can be documented to a given year with datestones, most cannot; style often provides the only clue towards discovering the period to which they may be attributed. It is evident that stone construction was popular throughout the agrarian era. This may have derived from familiarity with this technique or from a concern for safety. Indian problems were still common and were a major concern as late as the Revolutionary War. While most of these problems were in southern Rochester (now Wawarsing), they were still close by, and so would have provided good reason to continue using masonry construction.