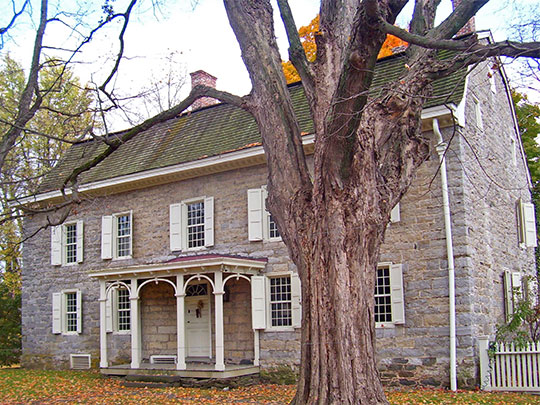 The Town of Marbletown was one of the first settlements to be established in Ulster County after the English took control of the region from the Dutch in 1644. At the time there were only two Dutch settlements — Kingston and Hurley — in the county. These Dutch villages, both near the Hudson River, were located on the Rondout and Esopus Creeks respectively. In 1669 a group of 24 discharged English soldiers from the garrison at Kingston received land grants upstream from Hurley on Esopus Creek and settled Marbletown. The creation of this community represented the first movement of settlers into the interior hinterlands of Ulster County, beginning a process of expansion and settlement in the county that would characterize the area's history for the next 150 years. During this period the expansion of the community at Marbletown led to the creation of Stone Ridge, an ancillary settlement situated two miles to the north.

In 1703 the town of Marbletown had a population of 228 and was the third largest settlement in the county. Although the original settlers were English soldiers, the town, like the rest of the county, was primarily populated by settlers of Dutch-German-Huguenot extraction. It was not until the 1740s and 1750s that English immigration into the county began to increase, and not until after the American Revolution that this influx began to overwhelm the historically Dutch area.