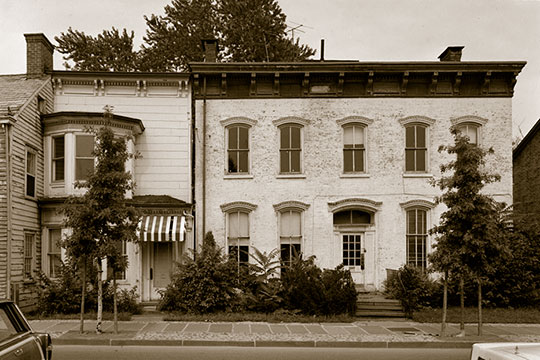 The Clinton Avenue Historic District was listed on the National Register of Historic Places in 1970. Portions of the content on this web page were adapted from a copy of the original nomination document. [1]

Within the district are a number of buildings of various types dating from the late seventeenth through early twentieth centuries. This district forms the immediate environment of the Senate House, a New York State Historic Site administered by the New York State Historic Trust. Clinton Avenue and North Front Street follow the line of the original stockade of Kingston erected in 1654 by Peter Stuyvesant. All of the streets within the historic district are remainders of the original street pattern of Kingston.

The Stockade section of the present City of Kingston was laid out as a Dutch village in the mid-seventeenth century. The site of the village was carefully chosen in relation to the topography on a high, delta-like plain which provided good drainage as well as effective strategic protection from attack.

The Clinton Avenue Historic District is located within the original Kingston stockade erected in 1654 by Peter Stuyvesant. All of the streets within the historic district are remainders of the original street pattern laid out by the Dutch. It is very likely that archeological remains of the stockade logs are still extant in the lot located across Clinton Avenue from the Senate House.

The Clinton Avenue Historic District contains a number of buildings which individually exemplify the city's architectural development from the seventeenth through twentieth centuries. Together, however, with the street pattern and landscaping, they form an environment that is a critical and irreplaceable part of the historical heritage of Kingston. The District forms a setting for the Senate House, a historic site administered by the New York State Historic Trust. The preservation of the district is crucial to the interpretation of the Senate House. The other buildings and street spaces in the district form the historic and spatial context of the Senate House.